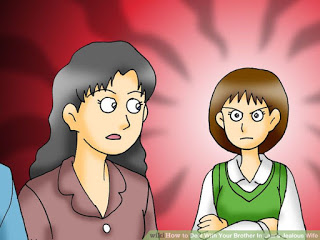 An attempt by a jealous Housewife in Akwukwu-Igbo (name withheld) in Delta State to seduce her younger sister’s husband with love portion, at the weekend backfired when she was allegedly found undressing.

Reports said that the 37-years old housewife had sought the help of a native doctor outside the community to ensure her younger sister’s husband looks her way over times he visits her.

It was gathered that the housewife, a mother of two children was allegedly given a prepared charm in power by the native doctor whom she was said to have paid N6,000 and was instructed to apply the substance into her in-law’s meal.  But this was not to be last Saturday when the unsuspecting in-law visited her (Housewife) alone to inform him of he travelling abroad with the sister. It was further gathered that the man, a successful businessman, had allegedly showered money on the Housewife who in most times expressed regrets of not being the wife.  Unconfirmed sources said the woman had “jokingly” told the sister one day that she was in love with the husband; a statement which reportedly did not go down well with her and the process reprimanded her.

Family sources said the woman had in January, 2016 allegedly entered  into  an affair with a man in the community and was also sent packing by the husband when family members  prevailed on to drop his action.

Expectedly, she had allegedly prepared a meal with the love portion and in her attempt to serve him alone as she was allegedly instructed by the native doctor proved abortive when the In-Law insisted they both should eat the meal.  The native doctor had allegedly instructed the housewife to ensure the charm was served alongside the meal alone for the inlaw an attempt she made that failed.  It was further gathered that after the meal, the Housewife suddenly started undressing her wrappers, a situation that attracted some for the villagers who thronged the scene to rescue her.

Speaking to our reported, a relation of the woman, John Ndukwe said: “she later confessed on how she visited a native doctor to ensure the man loves her which backfired”.

Family sources said the woman had in January 2016 allegedly been in an affair with a man in the community and was almost sent packing by the husband. Leadership

How to Tell if You Have Adhesions After C-Section