The lady involved in an alleged marriage scandal with the overseer of
the Omega Fire Ministries, Johnson Suleman, Stephanie Otobo has said
that her affair with the cleric involved a lot of sex. 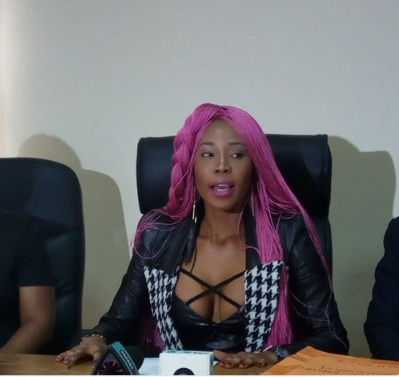 Stephanie Otobo, speaking at a press conference in Lagos on Friday, said
she spent time with Mr. Suleman in Naples, New York, and Lagos.

“Most of the times we spent together, we had sex,” Ms. Otobo told journalists.

“I refused to have a party with him because I’m not a lesbian and I don’t like women touching me.

“He told me he did that with all his past girlfriends that I was the
only one (who refused), that it’s very rude that I can do that to him.”

On Friday, inside Mr. Keyamo’s Lagos office, journalists pressed her for
more evidence – an incontrovertible one like bank statements, phone
records, messages.

After Ms. Otobo had said she had more explicit photos of Mr. Suleman,
including one he was holding his joystick, a reporter asked her the size
of Mr. Suleman’s manhood and to rate his performance in bed.

“Is it big? Is it small?” the reporter elucidated, about the size.

“We were in New York together, two months after I left Napoli. Then he
invited me to Nigeria. We were always having sex,” she said.

“In Nigeria, we stayed at Protea Hotel in Ikeja. there’s another hotel
after Airport Hotel; there’s a gas station, there’s a new hotel on your
right, that’s where he gave me something to drink. I thought it was
juice, he brought it, he said let’s drink together, and then he didn’t
want to drink, he wanted to eat.