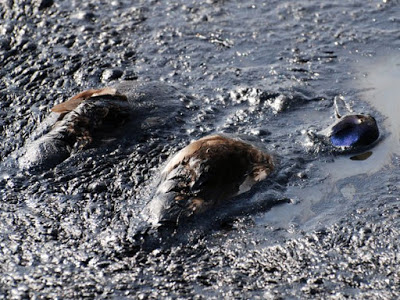 A leak that almost nobody has reported on has been pumping natural gas into the endangered beluga whale’s habitat for three months, and is still ongoing.
In addition to other wildlife, Cook Inlet’s watershed houses the endangered beluga whale species, who are now at risk thanks to the growing supply of natural gas leaking into the waters it calls home. Pipeline company Hillcorp Alaska has an eight-inch pipeline in cook inlet being used to transport natural gas to offshore oil platforms that has been leaking between 210,000 and 310,000 cubic feet of natural gas into the fragile ecosystem every day since December.

Hillcorp maintained in a public statement issued in February that it won’t be shutting off the pipeline, as doing so could cause even greater damage to the environment. However, the company has shut off the oil platforms that the pipeline feeds, and is deploying divers to conduct repairs on the pipeline.

“[M]aintaining positive pressure in the flow line is necessary to ensure any residual hydrocarbons are not released to the Inlet,” the statement read. “If a minimum pressure is not maintained in the pipeline it could fill with water which would allow for the escape of residual crude oil, as this line was previously used as a crude oil pipeline.”

The Hillcorp pipeline leak highlights a problem with the fragility of putting pipelines adjacent to endangered species, as that pipeline is just one of many running through the inlet. the Center for Biological Diversity has already called on Alaska to conduct a thorough inspection of all of Cook Inlet’s pipelines. ThinkProgress cited the research of Inletkeeper advocacy director Bob Shavelson, who said the web of pipelines in Cook Inlet are badly in need of updating and leak oil and gas into the ecosystem regularly:

Shavelson said his group wants a “comprehensive risk assessment” of the energy infrastructure of Cook Inlet and a review of the financial risks associated with pipelines in the inlet, about 275 miles of which are 40 to 50 years old.

In 2002, Inletkeeper published a report on the incidence of spills from the watershed’s oil and gas pipelines. It found that, in the five-year period between 1997 and 2001, pipeline spills were reported in Cook Inlet once a month on average, and that onshore pipelines leaked more frequently than offshore.

The growing presence of natural gas — which is methane-based — is a threat to the existence of the beluga whales inside Cook Inlet. Alaska’s Department of Environmental Conservation calls methane a “hazardous substance,” as it deprives water of oxygen, which can threaten both the belugas and the prey they eat to survive. Hillcorp has until May 1 to either fox or shut down the pipeline.