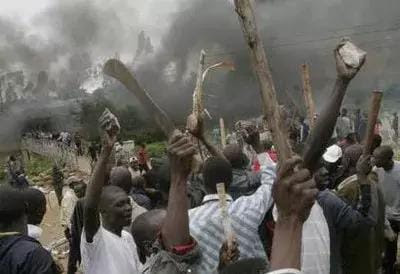 Several people are believed to have died and many others injured in an ethnic clash in Ile-Ife, Osun State.

Properties
worth millions of Naira were also destroyed in the violence described
by residents as a clash between Yorubas and Hausas which reportedly
started in Sabo area of the ancient town.

The crisis was said to have started on Tuesday in Sabo, and was still raging as at Wednesday afternoon.

Although
Ife, the ancestral home of the Yorubas has a majority Yoruba
population, the Sabo part of the city is mainly occupied by Hausas.

While the exact number of persons killed has not been ascertained, residents said at least five people were killed.

On
Wednesday, some Ife indigenes were seen mobilising in their dozens,
holding instruments like machetes, knives and other dangerous equipment.

Soldiers and police officers were seen around the city trying to restore calm.

Some residents accused the soldiers of bias, a development which made calming the situation more difficult.

Ekiti man kills self after posts on Facebook about suicide