Feature: India must come down hard on racism and mob violence 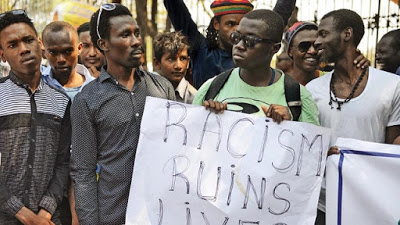 African students are coming to India at the invitation of local private universities to take advantage of the affordable higher education opportunities.

At a time when Indians have faced hate crimes in the United States and Australia and there is pressure on the government to ensure safety of Indians abroad, the attacks on Nigerian students in Greater Noida is also a time for Indians to turn the mirror inwards. The attacks on African students were allegedly prompted by the death of a local boy due to a drug overdose with the community blaming African nationals for his death. Many African students, unaware of the sentiment against them in some localities, faced violence at some commercial and residential areas in Greater Noida. The death was a matter for police investigation but what took place was vigilanteism at its worst and tarring an entire community with the same brush.

African students are coming to India at the invitation of local private universities to take advantage of the affordable higher education opportunities. They benefit the local economy, too, through expenses incurred in rental accommodation, transport and food. But the allegations of aiming to supplement their incomes through involvement in the drug trade have not spared even those who come to India to improve their prospects in life and make an honest living. The incident involving AAP leader Somnath Bharti in Delhi three years ago also had its origins in some residents objecting to the presence of African nationals in their midst. Last year, a Tanzanian student and her friends were assaulted in Bengaluru in response to a drunken driving incident involving a Sudanese national.

The Karnataka home minister claimed this was not a racist attack but only a spontaneous response to the car accident. But this targeting of people of specific ethnicities is exactly the hallmark of racial violence and the government cannot turn a blind eye to such incidents. In contrast to hate crimes against Indians in the US and Australia, which were lone wolf attacks, the attacks in India involved irate mobs, which reflect a certain level of societal sanction. Caste discrimination, which is another instance of the stratification of Indian society, is largely restricted to rural areas or kept under check through harsh laws like the SC/ST Prevention of Atrocities Act, and is treated as an internal issue of India by the international community. But morally and strategically, India cannot afford to take the recurring attacks on African nationals lightly. Most African nations have friendly relations with India and the India-Africa summit had laid out a concrete action plan for deeper cooperation in financial assistance, trade, education, food security, energy and peace-keeping.

At a moral level too, India’s traditions of non-violence, tolerance, and long cultural ties with Africa are imperilled by the actions of local mobs. It is heartening that foreign minister Sushma Swaraj took cognisance of the tweets by the distressed African students and raised the issue with Uttar Pradesh chief minister Yogi Adityanath. While a strong law and order mechanism can help curb mob actions and address grievances proactively, the political leadership can play a central role in emphasising respect for ethnic minorities and critiquing racial prejudices.