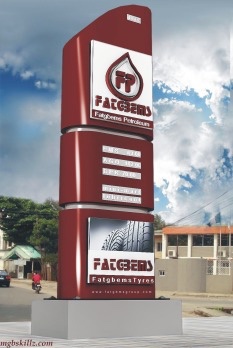 “l will like to emphasise that our new brand identity is not a change of direction rather it is a restatement of our values and our strong commitment to our customers as drivers of our business”.

Mr. Gbemisola who paid glowing tributes to the resilience of the company over the years, disclosed that from a humble beginning when the company started business with just one fuel station at Ejigbo in Lagos, “we now have a tank farm and several stations across Lagos and other south west states including plans to expand to the Federal Capital Territory”. He added that the company has also become known for its distinct identity of its integrity and quality service in the market.

Fatgbems, Mr. Gbemisola further disclosed,decided on the idea to redesign and rebuild its numerous stations into state-of-the-art service stations with the Berger station being the pilot, to meet with the increasing changes in the market

“With total deregulation of the downstream sector of the oil industry, customers’tastes have become sophisticated and are asking for innovative services beyond just fueling their vehicles.

“Apart from aligning with the thoughts of Lagos State government in transforming Lagos into a mega city status, we also feel that customers should buy fuel in an environment that is very conducive to create really satisfying fueling experiences” he concluded.

Also speaking at the event, Lagos State Commissioner for Energy and Mineral Resources, Mr Wale Olowu, commended the company for aligning its thoughts to the State’s vision of a mega city.

He commended the Fatgbems for for its resilience, noting that very few family businesses survive after the exit of its originator

He assured that the Lagos state government will continue to create the necessary conducive environment for investment and for businesses to grow in the state
Fatgbems petroleum is an independent petroleum marketing company incorporated in 1986 and has since grown to own a Tank Farm and retail outlets spread on a number of states in the country.