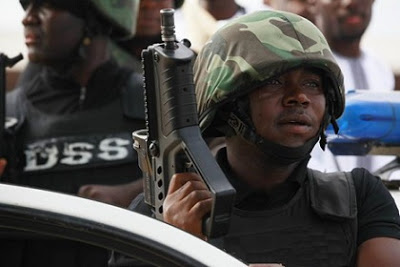 The
Department of State Services (DSS) wishes to inform the public about its
continued effort in ensuring that the activities of Boko Haram insurgents,
kidnappers and other criminal elements are drastically reduced or decimated. To
this effect, their capabilities are daily being downgraded.
Between 25th
and 26th March, 2017, the Service busted a ring of ISIS linked Boko Haram
members based in Benue State and the FCT. The group had perfected plans to
attack the UK and American Embassies and other western interests in Abuja.
During the operation to thwart this plan, five (5) key suspects, namely: Isa
JIBRIL, Jibril JIBRIL, Abu Omale JIBRIL, Halidu SULE and Amhodu SALIFU, were
arrested.
Earlier, on
22nd March, 2017, at Fika, Yobe State, a 20 year old Boko Haram member, Adamu
DATTI was arrested. He confessed his involvement in executing the sinister
activities of the group.
In the month
of April, two (2) suspected Ansaru kingpins, Ahmed MOMOH and Al-amin Mohammed
JAMIN were arrested on 4th April, 2017 at Igarra, Akoko Edo LGA, Edo State. The
duo were confirmed associates of Abu UWAIS, a main Ansaru kingpin terrorizing
residents in Kogi and Edo States
While these
terrorists are already undergoing detailed investigations, the Service stepped
up its efforts at stamping out the menace of kidnapping. In Rivers State for
instance, Daniel DIBIAMAKA was arrested on 24th March, 2017 at Obio/Akpor LGA,
for his complicity in the kidnap of one Emmanuel Orji UKAH on 20th January,
2017. On that same day, Godsgift ISIOMA was arrested over his plan to kidnap
one Dr. G.N DOUGLAS.
Determined
to decisively deal with the ugly menace of kidnapping and increasing violence
in Benue State, the Service, on 23rd March, 2017 at Bangaji, Gboko, Benue State
arrested Daniel LORVE, a member of the Terwase AKWAAZA (aka Gana) led notorious
kidnapping and terrorist group. Further investigation in this regard prompted a
joint military/Police/Service operation which resulted in the raid on a farm
suspected to have housed the armoury of AKWAAZA known for terrorizing
Katsina-Ala, Logo and Ukum LGAs of the State. High caliber arms and ammunition
were recovered from the scene notably; one (1) General Purpose Machine Gun,
three (3) AK-47 rifles and one (1) SMG rifle, with large quantities of
ammunition.
In Kogi
State, the Service, on 29th March, 2017 arrested Abdulmojid MOMOH and Ahmed
Tijani DODO at Adavi LGA for their involvement in kidnap activities. In a
similar vein, the duo of Salau YAKUBU Ontinwa (aka General) and Abdulmajeed
MUSA were arrested on 30th March, 2017 at the same Adavi LGA for similar kidnap
crimes. Preliminary investigation showed that the trio are key members of the
dreaded gang terrorizing innocent citizens and other travelers across the
State. Prior to these operations in the State, a gun runner only identified as
KAREEM was arrested on 27th March, 2017 for supplying weapons to criminals
especially Abu UWAIS, the Ansaru kingpin and notorious kidnapper.
In
furtherance of the Service’s efforts to check possession of illegal arms, it
arrested Chukwujioke IGBRU at Ikwo, Ebonyi State in a joint military/DSS
operation on 7th April, 2017. The suspect was alleged to be one of the
masterminds of the clashes between his Ojenakpa community and neighbouring
Isobo community in Obubra LGA of Cross River State. He was arrested in
possession of a G3 rifle.
In Abia
State, one Freeborn Chisom INNOCENT from Ikeduru, Imo State was arrested at
Nzaocha Street, Aba for engaging in subversive activities against public
servants. INNOCENT who is an ICT Expert used the social media, especially blogs
to launch negative campaigns against the persons and offices of top government
officials by telling lies against them and making them appear weak and
incapable of holding their posts. He also used his platform to incite one
ethnic group to violently attack another, thus creating tension and social
disharmony.
It has also
become instructive to let the public note that the Service has uncovered a
racketeering network involved in the issuance of Certificates/Letters of
indigeneship to persons from neighbouring African countries. The Boko Haram
terrorist group has become part of this network and uses it to buoy its
membership in Nigeria. A particular case was the arrest on 10th April at
Damaturu, Yobe State of JALO, a Jos resident Guinean and Boko Haram suspect. It
is also discovered that these non-Nigerians use their new indigene status to
seek priviledges including admissions into the Country’s tertiary Institutions.
In order to
check this ugly development, State and Local authorities are advised to be more
circumspect in the issuance of these Certificates/Letters of indigeneship.
While they are enjoined to always liaise with the appropriate Government
organs, especially the Immigration Service to checkmate this trend, the Service
is continuing with its investigations to fish out other members of this
criminal network. The public is also encouraged to report any suspicion in this
direction.
The Service
is equally aware of the efforts being made by some individuals to create a deep
sense of insecurity in some parts of the country simply for their own selfish
interest. To this end, The Service wishes to reiterate its commitment to
ensuring that peace prevails across the country and warns that it will not
hesitate to bring the full weight of the law against defaulters, no matter how
highly placed. The case of former Governor of Benue State, Gabriel SUSWAM, is
typical. The Service has continued to hold him in line with the dictates of the
law – more so that he has not cooperated on the issues concerning the recovery
of large cache of arms at his facilities. While investigation is ongoing on
this matter, the Service has valid detention warrants to keep him. He will be
charged accordingly, once the investigations are concluded.

These
successes have been achieved following the cooperation of well-meaning
Nigerians who have volunteered credible intelligence. While such persons are
commended and urged to do more for the good and safety of everyone, it is also
important to advise people who are desirous of creating problems to desist from
doing so. All law abiding citizens and residents are encouraged to go about
their normal businesses without fear as the Service and the appropriate
agencies of government will offer them the needed protection at all times.