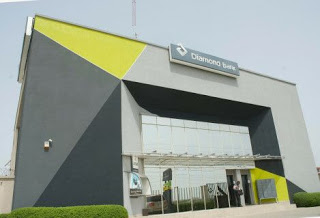 In the audited
2016 Financial Results as approved by the Central Bank of Nigeria (CBN)
and made available to financial and capital market correspondents in
Lagos, Nigeria, Diamond Bank posted 53 per cent growth year on year in
Total Comprehensive Income to N12.1 billion with non-interest income
surging by 6.9 per cent to N53.9 billion, ostensibly stimulated by
transactional fees.

Although the ripple effect of the tough operating
business environment impacted negatively on the performance of many
organisations in the country but Diamond Bank in the financial results
demonstrated its ability to maintain appreciable growth as revenue from
non-interest income, especially its mobile banking increased from N0.41
billion in 2015 to N2.6 billion in 2016. This accounted for 19.2% of
N13.4 billion ADC revenue in 2016 with Diamond Mobile Apps usage surging
from 6.8 million to 11.0 million, while transaction volume increased
from N6.9 billion to N11.5 billion year on year. The Bank’s retail
customer count currently stands at more than 13 million.

Speaking from
the Bank’s Corporate Head Office in Lagos, the Chief Executive Officer,
Uzoma Dozie, said that the Bank’s stable growth and continued success in
spite of the harsh economic headwinds, is hinged on implementing retail
and digital-led strategies that are primed to promote sustainable
growth and profitability in the long term.

A review of the financial
results for the period indicates that although, its Profit After Tax
(PAT) of N3.498 billion was lower than the 2015 position of N5.656
billion, the Bank’s capital adequacy ratio remained stable at 15.0 per
cent, equal to the Central Bank of Nigeria’s (CBN) required minimum,
signposting the Bank’s preparedness for profitable business expansion.

According to the Bank’s CEO, “the restructuring of Diamond Bank’s
operating model was a key development completed in the year. Following
its successful implementation, the emerging model has improved customer
engagement, strengthened Diamond Bank’s value chain approach to business
and delivered efficiencies across the Bank. These measures have helped
to improve Diamond Bank’s low-cost deposit base from the retail segment,
whilst also facilitating growth in non-interest income and a reduction
in interest expenses”.

In the months ahead, the Bank will continue to
deploy new technologies and digital applications to drive financial
inclusion and convenient banking amidst a decline in the pace of
economic activities and weak economic fundamentals.

Despite the ravaging effect of
the implementation of Treasury Single Account (TSA) by the Federal
Government and the Central Bank of Nigeria, customer deposits jumped to
N1.4 trillion from N1.2 trillion in the previous year, representing 15.5
per cent increase and the strength of confidence in the Bank’s
strategic outline.

Also, the Bank’s total assets surged to a new high of
N2.04 trillion from the previous year’s N1.75 trillion, which
represents 16.9 per cent increase. However, the Bank’s impairment
charges grew by 7 per cent to N59.024 billion, reflecting its prudent
provisioning, which is aimed at strengthening performance in the
business years ahead.

Although Diamond Bank has continued to grow its
corporate and mid-tier business segments, but according to the CEO, the
Bank’s focus remains on retail banking and providing convenient and easy
banking to the Micro, Small and Medium-scale Enterprises (MSME)
segment, adding that the concept of value chain management and the
deployment of digital strategies will help provide end-to-end solution
and ultimately improve value for the Bank and the customers.

As we move into 2017, the fundamentals of the Bank remain very strong
and it continues to generate operating profits that are comparable to
any of its peers, as evidenced by the 2016 financial results. However,
although not unique to Diamond, impairments in the Bank’s loan portfolio
continue to impact financial performance.

Therefore, mitigating the
impact of impairments and improving the quality of loans underwritten,
remain priorities for the Bank in the year ahead. Importantly, however,
our regulatory capital remains strong. Liquidity of the Bank also
remains high and is well above the guidance ratio stipulated by CBN.

Looking to the year ahead, we believe the macro conditions and other
external factors will remain challenging. However, by pursuing our
technology-led retail strategy and with our focus on innovation and
scalability, the bank is well-placed to benefit in the medium to long
term from the favourable fundamentals in Nigeria, namely a large
population, many of which remain unbanked. This strategy stands to
benefit all stakeholders, including our shareholders and customers in
the long run.