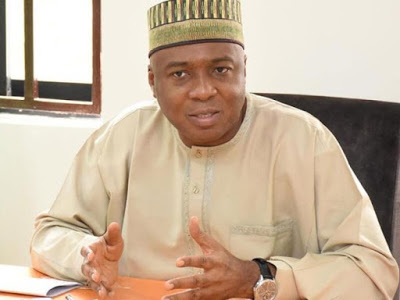 Arguably one of the most influential politician at the moment, a submission President Muhammadu Buhari recently affirmed at a public gathering. But curiously, every attempt to deconstruct Senate President Bukola Saraki has only further unveiled his positive politics and development inclination. Olawale Olaleye takes an introspective look at this emerging force in the annals of the nation’s body polity.
The title of this piece derived from a 2015 American comedy-drama film, Our Brand Is Crisis, directed by David Gordon Green and written by Peter Straughan. It is based on the 2005 documentary film of the same name by Rachel Boynton, but a fictionalised account of the involvement of American political campaign strategists, Greenberg Carville Shrum (GCS) in the 2002 Bolivian presidential election.

In 2002, Bolivian politician, Pedro Castillo (a fictionalised version of Gonzalo Sánchez de Lozada) contracted an American political consulting firm (based on James Carville’s Greenberg Carville Shrum firm) to help him win the presidential election. The firm brought in Jane Bodine (Sandra Bullock) to manage the campaign. But the opposition’s political consultant, a fellow American, Pat Candy (Billy Bob Thornton) was to be her nemesis.

In Bolivia, the situation preparatory to the poll was tense. The indigenous people, who are in majority wanted a constitutional reform to get proper representation. And to achieve this, they would rather embrace protest.

The American consultants, not knowing the language or the culture, were however persuaded by Bodine, a spent political strategist, to follow a smear campaign approach. But Castillo disagreed. It was only after a flyer, which accused him (Castillo) of an illicit affair and blamed on the opposition that he agreed to play their game.

Thus, waltzing through the crisis of seeming unacceptability, compounded by age and the growing quest for change, Castillo, who was then the sitting president, was returned to office, albeit with a close margin. His brand was evidently crisis and the crisis was his strength and winning joker.

The story of the emergence of Dr. Bukola Saraki as the President of the Senate must have by now found a place in the retentive channel of the brains of a majority of people. How he was alleged to have betrayed certain vested interests in his party to clinch the coveted seat and how his alleged horse-trading with the opposition Peoples Democratic Party (PDP) earned him the place he eminently occupies today.

To assume that his manner of emergence, against all odds, would not have consequences would have been naïve. But it appears Saraki saw it far ahead even before plunging into a potentially volatile arena and that, perhaps, could explain his survival in spite of the mines that have been set on his path.

From the alleged forgery of the Senate Rules upon which his election was predicated to claims of disregard for the party leadership, his trial at the Code of Conduct Tribunal, the swirling allegation of corruption against him, and later, the alleged non-cooperation of the Senate at his instance with the Executive, none of these, to an average observer, was believed to have happened by sheer accident.

It was good for him after all that a majority of these allegedly orchestrated narratives tarried awhile, providing a window through time for a few discerning minds to see the conspiracy against a man, who despite the strength of establishment forces, became the nation’s number three citizen.

Many a time, the question has been posed: what is or are Saraki’s sins? But not one answer has been supplied outside of the already established interests that had congregated against him. Not only have such answers bolstered the resolve of those, who have come to see the undercurrents of the power play before and after his emergence, they are also fast changing the narratives without prompting. Some of the posers that have dovetailed into serious debates amongst members of the public will suffice a bit.

Recorded as one of Saraki’s sins is the fact that he has refused to be a tool in the hands of people believed to have hijacked the instruments of government. The debate has never been about how many executive bills President Muhammadu Buhari sent to the Senate and which the institution refused to attend to? Rather, in helping to respond to the economic recession, the Saraki-led senate is reputed to have passed seven urgent economic bills without recourse to the Executive. Today, the nation’s economy is globally acknowledged to have pulled out of recession, technically, but no one has recognised the role of the Senate.

Talk about the fight against corruption and the question that naturally pops up is: how many bills has the Executive sent to the National Assembly to strengthen the fight against graft? It is just one that everyone knows and it is the whistleblower bill, which though is still undergoing the process of approval, is already in effect, courtesy the understanding of the senate.

But further supporting that argument is this: how many public accountability bills have been sent to the legislature? Maybe the Executive is still pondering that option. What about the judicial reform bills? None still! The talk about economic diversification is as monotonous as the concept itself, but how many bills have been sent in by the executive in respect of that? Nobody has an answer because it does not exist.

On the contrary, the man who is reported to have led the initiation of 13 economic reforms and business environment bills is the one being branded as the black sheep that is against the change agenda, not minding that he was “an investor” ab initio in the change stock market.

Curiously, regardless of the distractions designed in his way, Saraki has never stooped to excuses but continued to push on with legislative reforms, such that is gradually redefining the senate he leads and the leadership he is offering.

Definitely, what has so far been churned out by the Senate may not be the best or the minimum expectations from these representatives, what cannot be taken away from them still is that there is a leadership that is dynamic, progressive-minded and firmly in charge of the Senate through the support of his colleagues and by extension, the National Assembly as its chairman.

Saraki’s politics of ideas has always trumped his travails, even though his traducers would dismiss this for obvious reasons. With an enviable capacity to process, analyse and manage information, he has always read with near accuracy, the future of his political career, an endowment that provides clear edge over many of his contemporaries and to the awe of his support base.

Deliberately stoking crisis for Saraki may be fruitless because he not only has the capacity to manage such but has also risen through it over time and to the disappointment of those, who may detest his demeanor or politics. His brand is crisis, no doubt, but not because he enjoys strutting through it, but because it is most times inevitable for him however cushioned by the fact that he has developed a pastime for staying atop crisis situations.