Three teenagers killed in a shocking crash in far northwest NSW yesterday were siblings travelling in a family convoy with their father.
Jack Pink, 19, was driving north in a Pantech truck full of furniture when he collided head-on with a southbound fuel tanker on the Newell Hwy near Boggabilla just after 6am.
He died at the scene and his two sisters, Marina, 17, and Destiny, 15, who were travelling behind him, were also killed as their vehicle also collided with the tanker and burst into flames, Boggabilla Rural Fire Brigade member Garry Roberts said. 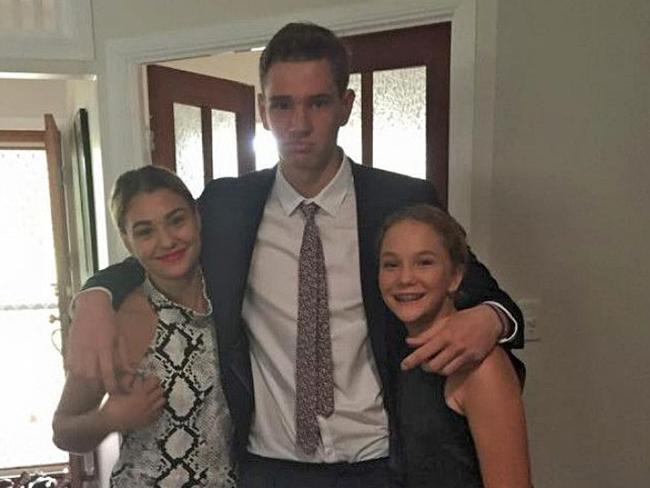 The cabin was ripped off the fuel carrier and its male driver thrown from the truck but he survived with face and back injuries and was flown to Toowoomba Hospital.
In a heartbreaking twist to the tragedy, the father of the three teens, Glenn, was understood to be travelling ahead of them and heard about the accident over a two-way radio before turning back to discover the gut-wrenching scene.
Emergency crews found him collapsed on the road.
“We saw a man laying in the middle of the road when we arrived but we came straight to the burning vehicles,” Mr Roberts said. “We learnt later it was the father of the people in the cars.”
The two sisters had been towing what authorities believe was a portable coffee cart from a show in Dubbo back home to Brisbane.
Marina, one of seven children to parents Jaze and Glenn, was just a day short of her 18th birthday.
“All gone at the same time … to lose 1 would be crazy. They lost 3 in 1 split second is just out of this world,” family wrote on a fundraising page.
“Jaze and Glenn are good people with an amazing family … what they do is everything for the kids.
“This is a crushing blow to this tight-knit family.”
The grisly scene remained nearly untouched 12 hours after the crash as NSW Fire and Rescue crews worked to empty the tanker before the bodies and significant wreckage could be removed. Extra resources were being deployed from Sydney to help Barwon area police, and crash investigators from Tamworth were called in.
The truckie is understood to be local to Boggabilla, where news of the crash rocked the local community, and the Newell Hwy is known to be treacherous.
“It’s just a dead boring stretch of highway,” one local said. “Unless you go all the back tracks … that’s the way you go to Sydney.”
Barwon Police Detective Inspector David Silversides said his officers were constantly asking people to take care on the Newell. “There is an ongoing message to the community to be mindful of fatigue and all those other factors,” he said.