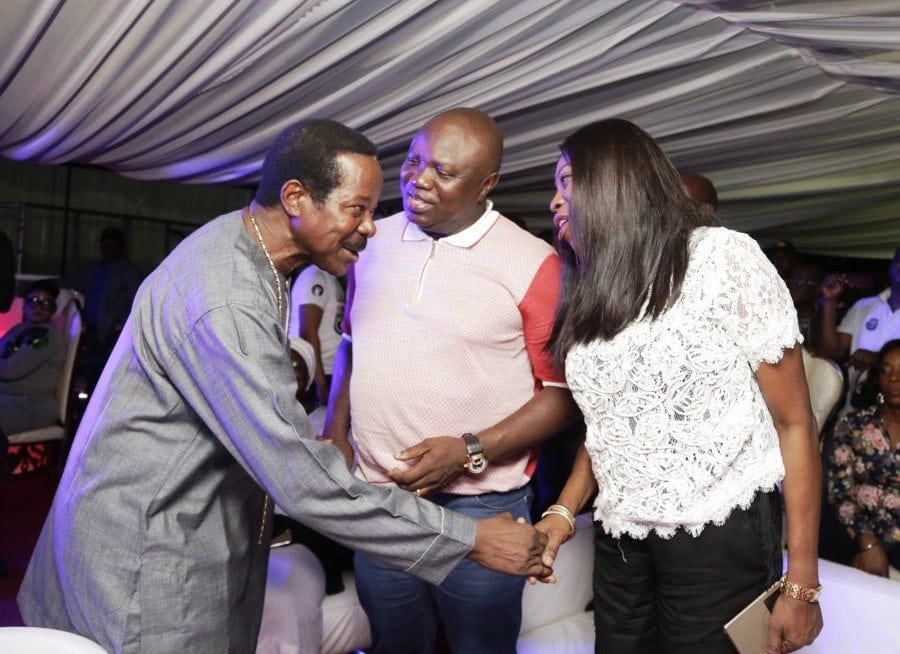 Lagos State Governor, Mr. Akinwunmi Ambode (middle); his wife, Bolanle (right) and King Sunny Ade (left) during the Golden Jubilee concert to round off the Lagos@50 celebrations at the Eko Atlantic City, Victoria Island, Lagos, on Sunday, May 28, 2017.
Lagos State Governor, Mr Akinwunmi Ambode has said that if Nigeria is to occupy its pride of place among the comity of nations, concerted efforts must be made to frontally and comprehensively review cultural and political issues slowing down development.
The Governor said for too long, the nation has allowed cultural and political differences to inhibit growth, but that such must stop for development to be fast-tracked in the overall best interest of Nigeria and Nigerians. 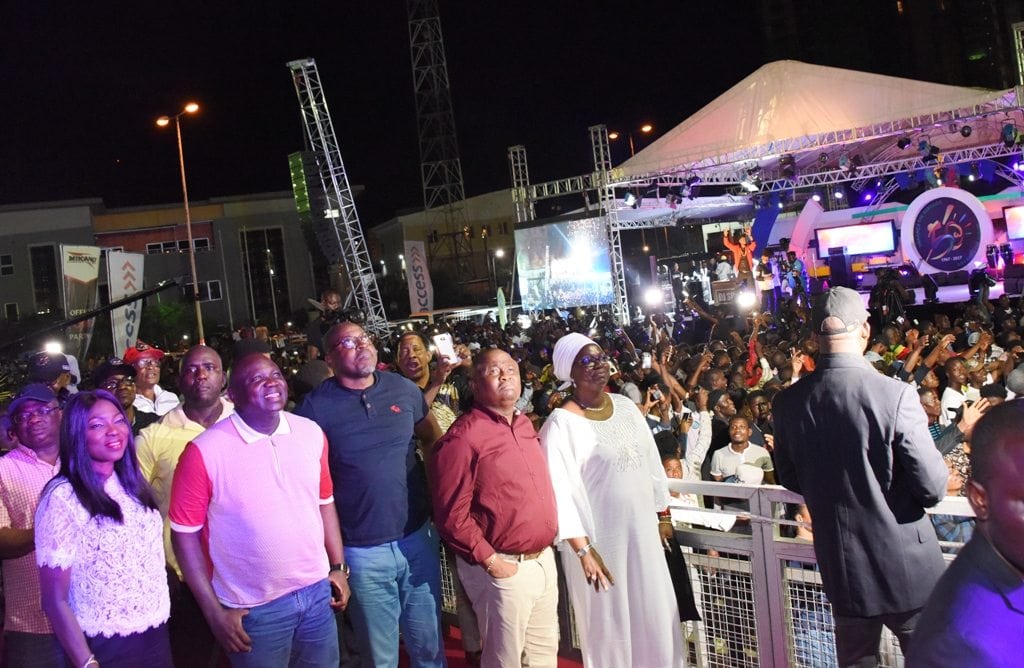 L-R: Wife of Lagos State Governor, Mrs. Bolanle Ambode; her husband, Governor Akinwunmi Ambode; Co-Chairman, Lagos@50 Committee, Mr. Habeeb Fasinro; Senator Olamilekan Adeola Solomon and Acting Commissioner for Tourism, Arts & Culture, Mrs. Adebimpe Akinsola during the Golden Jubilee concert to round off the Lagos@50 celebrations at the Eko Atlantic City, Victoria Island, Lagos, on Sunday, May 28, 2017.
Speaking at an international conference put together by the State Government as part of activities marking the golden jubilee anniversary of the State with the theme: ”Towards A Smart City: Preparing For The Next 50 Years Of Prosperity,” Governor Ambode said it was pertinent for everybody in the country to unite and agree to put issues relating to development on the front burner and relegate political and cultural considerations.
He said for the State to grow from mega city to smart city, all sectors and individuals must play their part and resolve to be on top of their game in their respective areas. 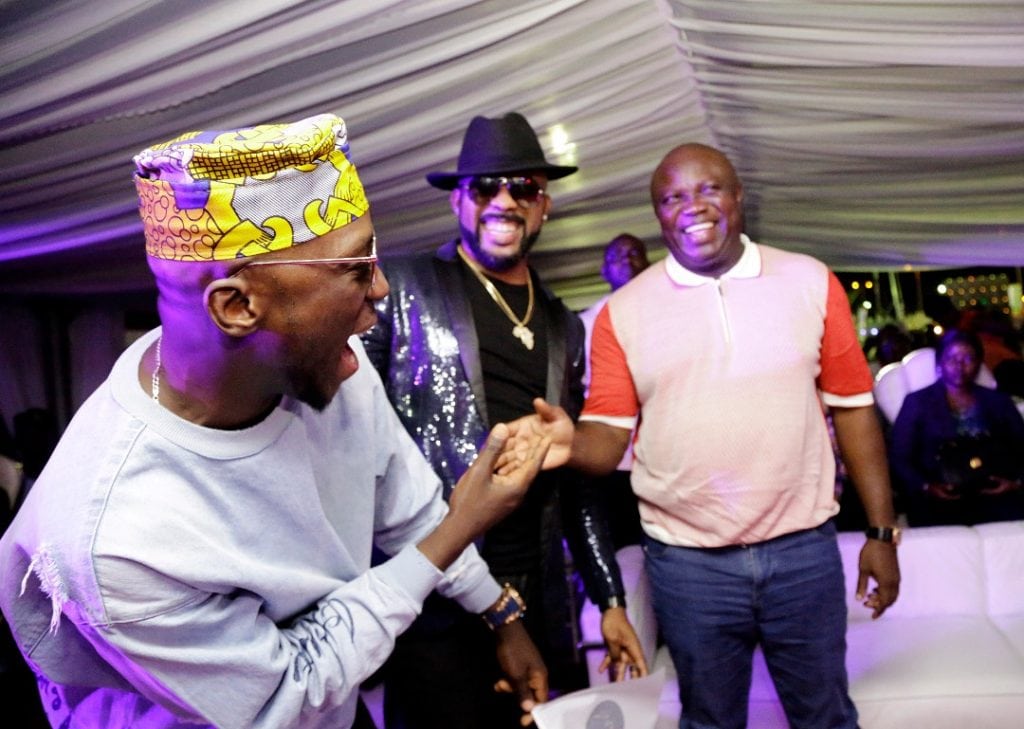 R-L: Lagos State Governor, Mr. Akinwunmi Ambode, with Hip-Hop Artistie, Banky W and DJ Spinall during the Golden Jubilee concert to round off the Lagos@50 celebrations at the Eko Atlantic City, Victoria Island, Lagos, on Sunday, May 28, 2017.
He said: “For me, the measurement of our development into a smart city should be all encompassing ranging from the quality of service that we render as a government and the service we render from individual to individual and from business to government or from individual to business.
“The totality of that is what we call smart. It is not enough for me to say government will provide the smart city, there should be smart business between for instance the tailor and the designer. It is something that is so microscopic but in totality, it is about being smart. So, if a foreigner comes in and moves to a restaurant and gets quality service, he knows that there is something happening in that city, he does not have to come to Alausa to see it. 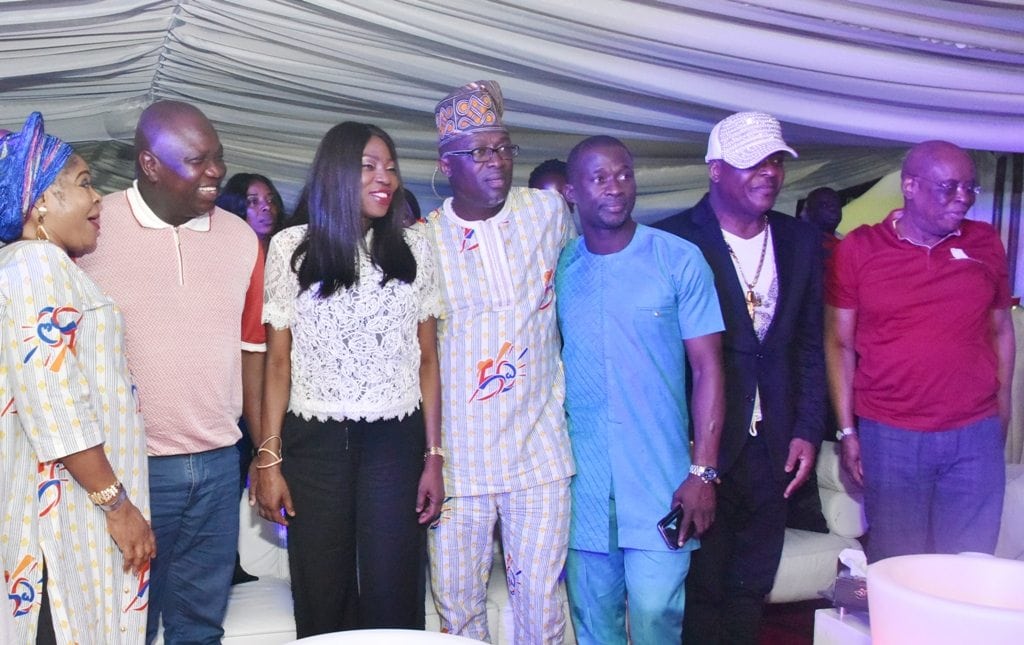 Lagos State Governor, Mr. Akinwunmi Ambode (2nd left); his wife, Bolanle (3rd left); fuji musicians, Adewale Ayuba (middle); Sule Alao Malaika (3rd right); Sir Shina Peters (2nd right); former Governor of Ogun State, Aremo Olusegun Osoba (right) and Salawa Abeni (left) during the Golden Jubilee concert to round off the Lagos@50 celebrations at the Eko Atlantic City, Victoria Island, Lagos, on Sunday, May 28, 2017.
“Yes, we have been talking about smart government, smart business, smart city but it is a convergence of all the three that can help. Now, in all these, getting smart requires the examination of some critical issues like the cultural management issues, political issues, the needs of the politically economy that frustrates you from doing what you are supposed to do yesterday until next year. Those are the deep issues that must be critically examined and reviewed,” Governor Ambode said.
While alluding to how Dubai which is one of the emirates in the United Arab Emirates (UAE) was able to transform into what it is today even still being within a country, Governor Ambode said cultural issues inhibiting growth must be addressed in Nigeria also so as to fast track development.
“Yes, I like to be a Dubai, one of the eight emirates in United Arab Emirates (UAE). Dubai is not a country and what was allowed to happen in Dubai would be difficult in Lagos and so to pull Lagos out of Nigeria like Dubai in UAE, we’ve got to be methodical. So, as much I want to run, those cultural impediments, those political impediments are pulling us down but do we have the support of this citizens? So, these are the things we do not necessarily speak about. We obviously have those impediments that are limiting us from becoming what we want to be and it is for us to tell ourselves that in the next 50 years, lets break the ice.
“So, there must be a concerted effort from everybody – professionals, private sector, public sector to resolve for instance that we want to make Lagos a Dubai and we don’t care whatever happens. We must have that political support and trust of the people irrespective of our political leanings, the bottom line is that this is more about our children. We want to do what is right.
“I have so much passion for Lagos and I believe strongly that if anything good is going to come out from the brand called Nigeria, it is going to start from Lagos and that is why we must get it right and do the right thing,” he said.
Responding to a question on efforts being made by the State Government to transform Yaba to the next tech hub, Governor Ambode recalled his recent visit to the area, revealing that plans have reached advanced stage to acquire a land space adjacent industrial park in Yaba measuring 8,000 square metres and turn it to the next tech hub.