by metronews
in #SmartLagos, Event, Investigative
0 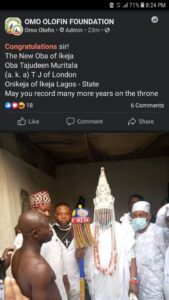 If care is not taken,the relative peace which Ikeja, the capital and commercial nerve center of Lagos state is presently enjoying may come under threat if feelers reaching MetroNews is true.

According to concerned observers,an alleged notorious land grabber aided by some royal family members hijacked and installed him as the new Olu of Ikeja over the weekend to the charging of the royal houses and the king makers.

After overcoming the shock of the way and manner Alhaji Tajudeen Muritala popularly called “TJ of London” arrogantly installed himself as King of Ikeja,the people are hell bent on ensuring he does not have a peaceful reign vowing to make the throne very hot for him till the traditional steps towards the installation of a well accepted selected Prince is done.

The initial suspicion that government was involved in the rape of their tradition was allayed when Ikeja Local Government published a disclaimer exonerating government from the drama. The advert read in part “The Ikeja Local Government wishes to notify the entire public that the family has not notified the council on the chosen candidate as stipulated in the norms and laws of the state.”

The Kingmakers in their reaction said their houses have been under siege from the men of Tajudeen Muritala .The Divisional Police Officer of Ikeja was said to have received signal from Abuja to give police protection for the installation last weekend against the usual process of how a king is installed which involves the Governor himself who will hand over the staff of office to the King. No government official was at the event and this is an invitation to chaos.