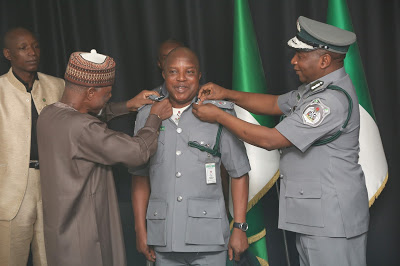 The promotion was strictly based on merit, considering the cumulative scores from examination, oral interview and seniority.

Some of the newly promoted officers to the
exalted rank of Comptroller include Musa MBA, Wale Adeniyi, Angbalaga
J.J, Seriki-Kebbi, MM, while the Public Relations Officers, Joseph Attah
and his deputy Abubakar Dalhatu were promoted to Deputy Comptroller and
Chief Superintendent respectively.

During a symbolic decoration
at the Customs HQ, Abuja, the CGC charged the officers to see their
promotion as a call to higher duty.

As part of the ongoing
reforms in line with circular Ref: HCSF/EPO/EIR/CND/100/ST/98 of
8th September 2016 from the Head of Service of the Federation and the
approval of Government since April 1992 for Nigeria Customs Service to
align with the Nigeria Police Force rank structure, the CGC approved the
removal of dichotomy against holders of Higher National Diploma from
Bachelors Degree in the Service.

He directed immediate alignment of rank structure of the service with that of NPF.

Consequently,
officers in the Inspectorate cadre on Salary Grade level 08 and above
are to align with the appropriate rank in the Superintendent Cadre.

Responding
on behalf of the newly decorated officers, Comptroller Olusemire Kayode
thanked the Management and gave the assurance of recommitment to
effective service delivery.

He said, the newly promoted will
uphold the confidence reposed in them by contributing their best to the
course of Nation building.