Buhari must break silence on appointment of CJN, group says 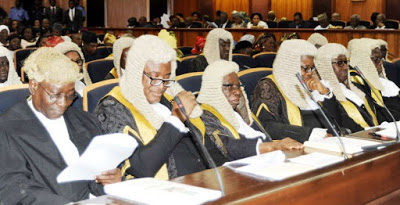 An advocacy group, Access to Justice, has called on President
Muhammadu Buhari to break his “discomfiting silence” on the appointment
of a substantive Chief Justice of Nigeria.
In a statement Monday,
the group said the president should be transparent as to the reasons why
he takes any course of action relating to the appointment of the
country’s chief judge.
“Nigerians are entitled to know why he is
taking, or not taking, any line of action and assess whether the grounds
and motives he asserts are legitimate, and are in the best interest of
Nigeria,” said Joseph Otteh, Director, Access to Justice.
“Already,
there are escalating fears and speculations that there is an ‘ethnic’
dimension to his foot-dragging in this matter. This is not good at all.”
Mr. Buhari swore in Walter Onnoghen, as acting Chief Justice of Nigeria on November 10 last year.
Mr. Onnoghen replaced Mahmud Mohammed whose tenure expired a day earlier.
An
acting Chief Justice of Nigeria may not be reappointed to serve in that
capacity after the expiration of three months from the time he was
appointed except on the recommendation of the National Judicial Council,
according to Section 231(5) of the Nigerian Constitution.
Mr. Onnoghen, 66, from Cross River State is the first southerner to come close to getting appointed as CJN in several years.

Access
to Justice said the huge challenges facing the Nigerian judiciary would
not be resolved by insisting on the normal practice of orderly
succession to the office of the Chief Justice.
“Access to Justice
is not suggesting by any means that the acting Chief Justice of Nigeria
is not equipped for the task ahead or that his commitment is not up to
scratch,” said Mr. Otteh, a lawyer.
“But we think that the focus
of the clamour for a substantive Chief Justice of Nigeria should be, in
the circumstances, that he is the best person for the job and not just
because he is next in line for the office.
“We urge that whoever
must be Chief Justice of Nigeria must be such a person that will lift
the Judiciary from the mud and muck in which it is now stuck, and
deliver a new Judiciary to the Nigerian people, and has the capacity and
commitment to do so.
“This is why a robust public hearing at the Senate for any candidate nominated for that office is a clear necessity.”
Mr.
Otteh also noted that the Judiciary, over the years, had been
systematically weakened, politicised, corrupted, and mismanaged.
“Nigeria’s judiciary is in a deep crisis now,” he said.
“It
is now a largely broken third branch of government bumping along the
bottom; it will take a long time for it to rebuild strength, and the
image and perception of an impartial, independent and trustworthy
institution.”