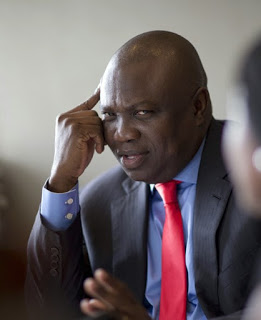 Lagos State Governor, Mr Akinwunmi Ambode on Wednesday signed
into law the anti-kidnapping bill recently passed by the State House of
Assembly, with a pledge to ensure its full implementation to eradicate
kidnapping once and for all in the State.
The Prohibition of the Act of Kidnapping Law imposes a penalty
of life imprisonment on kidnapping for ransom. The
law also stipulates that where a victim dies in the course of kidnap, the
suspect is liable on conviction to death.
Speaking at the signing ceremony held at Lagos House in Ikeja,
Governor Ambode said the spate of kidnapping in the State had gotten to a level
that required decisive action from government, hence the need for the enactment
of the law to send serious message to perpetrators of such heinous crime.
He said aside the enactment of the law, the State Government was
also putting in place appropriate measures particularly in the schools and
other vulnerable targets to prevent kidnapping and other security breaches.
The Governor said: “Security is of utmost importance to our
administration and we are confident that this law will serve as a deterrent to
anybody who may desire to engage in this wicked act within the boundaries of
Lagos.
“Why we use this law to address the challenge and punish the
criminals, we are also putting in place appropriate measures particularly in
our schools and other vulnerable targets to prevent security breaches and it is
important that we ensure that everything we do in respect of this
anti-kidnapping law is in good faith and good spirit to eradicate the issue of
kidnapping once and for all in the State.”
Governor Ambode assured that the justice system would be
activated to execute the anti-kidnapping law to the letter to ensure that any
criminal caught is subjected to the full wrath of the law.
The Governor, at the ceremony, also signed the Sports Trust Fund
Bill and the Sports Commission bill into law, explaining that the laws were
enacted to address key issues bordering on security and effectively harnessing
the potentials in the sports sector.
Giving insight on the laws, Governor Ambode said: “The Sport
Commission Law will give legal backing to the formulation and implementation of
sport policies in the State while the Sport Trust Fund will enable government
to raise money for the development of sporting facilities and activities.
“This fund will provide a platform where the State Government
can enter into partnership with the private sector to finance sports
infrastructure, tournaments and programmes which will in turn create employment
and generate revenue for the State.”
He added that as provided for in the law, a Board of Trustees
comprising all stakeholders in the sports community would soon be inaugurated
for the Trust Fund, saying that with the law, government was restating its
commitment to scale up sports development and make the State the hub of sports
in Nigeria.
He also appreciated members of the Lagos State House of Assembly
for their efforts in the enactment of the laws.
In his remarks, Speaker of the Lagos State House of Assembly,
Hon. Mudashiru Obasa, said the signing of the bills into law by the Governor
was a clear testimony of the commitment of the State Government to the security
of citizens and sports development.
Obasa,
who was represented by the Majority Leader of the House, Hon Sanai Agunbiade,
said it was particularly gratifying to note that the anti-kidnapping law was an
all-encompassing one which prescribes punishment for the actual actors, those
that collaborate, aid and abet and those who see the act of kidnapping being
perpetrated and do nothing about it, as well as confiscation of properties
attached to the heinous crime of kidnapping.
He said the passage and signing of the law was a direct response
and responsiveness of the government to the spate of kidnapping in the State,
adding that the expansive provisions in the law would, in no long distant
future, ensure the eradication of the menace in the State.