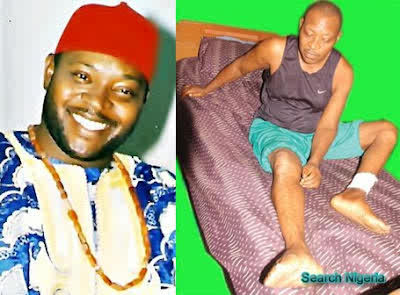 The actor who, for a while, has been down with kidney disease gave up the ghost in the early hours of today.

Nollywood producer and scriptwriter, Chidi Nwokeabia, who confirmed the sad incident stated that the deceased actor was billed to travel to India this Friday to commence treatment for his protracted illness.

“I got calls from Torino and Sunny Mc Don earlier today that he died this morning few hours after securing a visa to India to commence his kidney transplant. He was to be accompanied on the trip by his son, doctor and the donor,” Nwokeabia said.

According to earlier reports, the actor’s conditioned worsened on Sunday, March 4 and he has been unconscious since then. Footage emerged online of the actor in his unconscious state.

The actor who has been in the hospital for about a year and seven months reportedly required N2.6 million to pay his hospital bill and N11 million for kidney transplant and eye surgery in India.

According to reports, over N15 million had been raised for the actor but sadly, he didn’t live to start his treatment.

Osinbajo is a True Man of God – Gbenga Daniel