A 22-year-old woman, Abidemi Omoniyi, was yesterday rescued from a gang of suspected kidnappers, ritualists at Agege, Lagos.

Omoniyi, a front desk officer at a hotel in Omole Phase I, boarded an unpainted taxi around 7am at  Egbatedo Bus Stop enroute Pen Cinema. 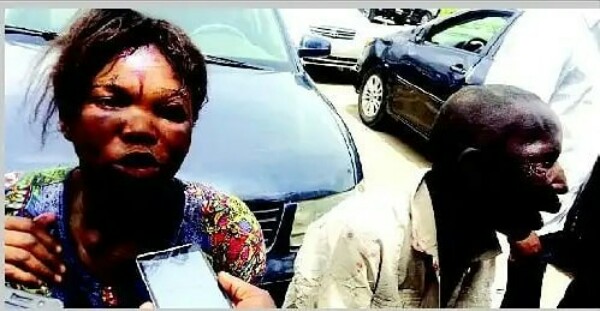 The Nation reports that,the woman, who said she started screaming as soon as she realised she joined a wrong vehicle, told reporters that the driver, Emeka Okeke and his accomplices told her she would be taken to Ibadan where a customer was waiting to buy her vital organs.

The driver brought out a simcard and put inside a phone and called someone that they were on their way with the items.

“They told me they will cut off my breasts and other parts and that a customer was already waiting for us at Ibadan. The old man said I will die today that no matter how I screamed, no one will hear my voice.

“Fortunately, there was a man that has been observing what was happening. The driver got to a busy spot and raised alarm.

He said he has been hearing my voice and it seemed I was shouting for help. He asked them who I was and the woman immediately said I was her younger sister and that our parents said they should bring me home.
I told the man I do not know them and that I had entered the vehicle thinking it was a taxi. That I only have my makeup kits in the bag I was carrying and not clothes as they claimed.

“That was when people gathered and started beating them. They were four but one was able to escape while the other three were beaten and handed over to the police.”

But the suspects denied being kidnappers, insisting that they were just fraudsters looking for who to swindle.