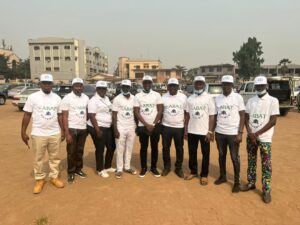 The ABAT Movement is a group working for the actualization of the presidential ambition of ASIWAJU BOLA AHMED TINUBU.

The inauguration was held yesterday at The Haven Event Center, Ikeja GRA, Lagos.

The strong Tinubu disciple vowed to mobilize Nigerians for the aspiration of the former Governor of Lagos state in the forthcoming 2023 general elections.

According to PiPO as he’s fondly called,”I will mobilize our people to support the aspiration of the national leader of our great party. His leadership acumen is unrivaled. His administrative dexterity is unmatched while his passion towards the development of the country remains profound.

“Asiwaju’s administrative acumen is second to none. Despite the withholding of the state allocation by ex-President Olusegun Obasanjo, he delivered on his electoral promises to Lagosians. He made his marks positively,” he said.