2023: Senator Kalu trends on Twitter after speaking on Presidential bid

Following his visits to two former Nigerian heads of state, and Emir of Minna, the Senate Chief Whip,Orji Uzor Kalu is currently on trending on Twitter.

Senator Kalu had on Monday declared his willingness to run for Presidency if given the mandate. Sen. Kalu said this while addressing the media after his visit to Generals Ibrahim Babangida and Abdulsalami Abubakar.

Kalu, a former Governor of Abia State, also said that zoning is not a Constitutional matter but party affairs, adding that his party, the APC could not have zoned the presidency.

The Senate Chief Whip’s comments however elicited various reactions from thousands of Twitter users. Many of whom expressed various opinions with regards to Sen. Kalu’s position.

The twitter thread titled “Orji Uzor Kalu” which was monitored by Nigeria Daily revealed the reactions of various users.

Some Twitter users described Kalu as the next President of Nigeria stating that he was a better candidate for the APC, while some questioned the unity and seriousness of the Southeast in their quest to produce the next President in 2023.

Below are some of the reactions as captured;

@iamMchenry wrote “Who is a better candidate now. Pdp will give the ticket to Atiku not peter obi. In Apc, OUK will do a better job than el rufai and tinubu. Check their stats where they were governors.” @iamMchenry

@obi_nwosu wrote :”Some may not like the sound of this, but Orji Uzor Kalu and Rochas Okorocha are currently the top politicians giving Igbo presidency 2023 a serious image. I will not be surprised if one of them ends up being the next president. They have both been on bridge-building missions”

@SodiqTade wrote: “Orji Uzor Kalu is a Presidential Material in APC .He is way better than many in that Party.” 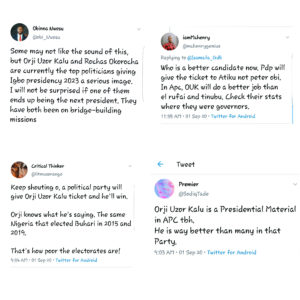 Trailer Crashes Into Shops In Lagos