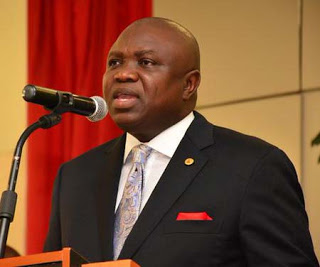 The Lagos State Government has commenced the process of
awarding contracts for the construction of a total of 181 community roads
across the 57 Local Government Areas (LGAs) and Local Council Development Areas
(LCDAs) in the State, in line with the promise made by Governor Akinwunmi
Ambode.

The initiative to rehabilitate the roads within
the communities was introduced in 2016 by Governor Akinwunmi Ambode’s
administration to fast-track development simultaneously with other major road
projects across the State.

By the initiative, a total of 114 roads were
either constructed or rehabilitated two per each of the 57 Councils in 2016,
while in a bid to consolidate on the massive infrastructural drive of his
administration, Governor Ambode last Thursday announced readiness to increase
the number of the roads from 114 to 181.

According to the Invitation For Bids (IFB) which
had since been published in major national dailies, the government announced
the list of the roads and specification for the construction which include
drainages, street lights and walkways.

The IFB also include the length, average width,
number of roads, pavement and the duration for the project which is six months,
while all bids must be submitted on or before February 17, 2017.

Speaking at the first Quarterly Town Hall Meeting
for 2017, the sixth in the series, held at the Ajelogo Housing Scheme, Ajelogo
Market Road, Akanimodo, Mile 12, Governor Ambode had said that with the latest
plan, some of the councils will now have more than two roads especially in
areas where there is need to fix other adjourning roads to a main road to
improve on the road network.

The Governor said the need to scale up the road
improvement efforts arose from the fact that he had received many requests on
rehabilitation of roads from residents, adding that many of the roads captured
for 2017 were key roads that would have positive economic impact on the people.

“I want to pronounce here that you should watch
out next week in the newspapers, we are advertising 181 roads which would be
done in all our local governments.

“What we have found
out is that if we decided to continue with two, some of those roads are not
linking each other to the main road, so most likely you would see that if we
are supposed to do some roads in some local governments, it would only make
economic sense if there is a linkage.
“So, you would see
in the advert that some local governments would have like three, some would
have four roads, but the average is 181 and if you divide that by 57, that would
be a minimum of three roads from each local government,” Governor Ambode said.