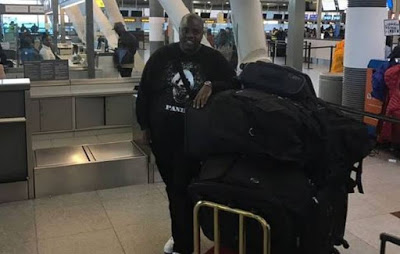 Has he found his one true love? A
Zimbabwean businessman is keeping his followers guessing after
initiating a Facebook search for a wife. Accompanying the post was a
long list of requirements for his potential life partner.
Wicknell Chivayo‚ who is also known as
Sir Wicknell to his more than 96‚000 Facebook followers‚ posted on the
31st of December: “Looking for a wife…I have finally decided I am
getting married in 2017”‚ before he outlines his 16 requirements to be
his future wife. Applicants should be able to make a man successful‚
have no previous record of cheating and should be well trained in home
making with excellent hospitality skills.”
The post has received more than 400
shares and 1‚700 comments. One user commented‚ “Problem is you not
everyone’s type”. Another user came to Chilvayo’s defence saying‚ “I
think the guy is only joking folks‚ where is your sense of humour”.
Chivayo then took to the social
networking site the following day to announce to his followers that he
indeed found a successful candidate. The post that has subsequently been
removed shows a woman lying on his chest with her face covered; the
caption reads “Sir is chilling at home with the successful candidate”.
However‚ there are no further happy snaps with the favoured candidate‚ begging the question: has it worked out‚ after all?
The quest for love on the internet is not
as uncommon as some may think it is. A Hong Kong businessman was
looking for a potential male partner to marry his lesbian daughter after
she revealed to her family that she secretly married her female partner
of seven years. Cecil Chao tried twice – in 2012 and 2014. He was
prepared to pay $65 million to any willing man as long as he is
kind-hearted and generous. He got more than 10‚000 applicants but she’s
still not hitched to a man.
And last year‚ a father took out a front
page ad in Salt Lake City‚ USA‚ seeking a wife for his perpetually
single son of 48 years old. The ad was calling for attractive females no
older than 38 years old and willing to have children as soon as
possible.
“Minimum of a University Degree
preferably in finance or business related. Masters degree is an added
advantage. Satisfactory income source backed by a bank statement. Oh‚
and natural hair”.
Previous Post

Presidency distances self from reports of fresh letter to Senate