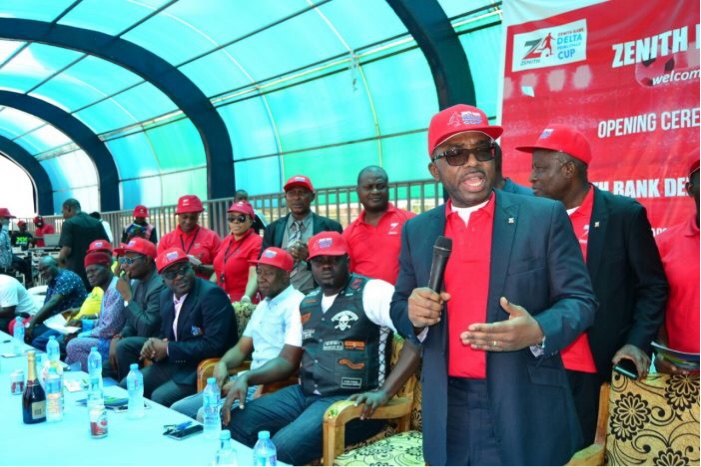 Onyeagu said the gesture was to fulfill its social corporate responsibility, adding that the bank has a bias for youth development.

According to him, Zenith Bank’s passion for youth empowerment programmes has seen it intervene in areas like ICT, and sports development, adding that in the last twelve years the bank has “singlehandedly sponsored and supported female basketball league nationally”.

He said its sponsorship of the Zenith Bank Delta Principal Cup was a move to recapture the competition’s lost glory, adding that the Principal’s Cup in the 70’s and 80’s was the epitome of sports development.

His words, ‘For Zenith Bank Principals’ Cup sponsorship, we looked at it and felt that it is time for us to take bring back its lost glory. In those glorious days of the 70’s and 80’s Principal Cup was the epitome of sports development. We felt that by us developing and partnering with Delta State to refresh, rejuvenate and revitalize sports development we will provide the opportunity for talents to be developed, nurtured, and it is an opportunity for us to make it a lot more expansive, make it all inclusive, complement the State’s efforts in terms social development and also create a basis for standardization in the school’s curriculum.”

He said the Zenith Bank Delta Principal’s Cup will unearth sporting talents “that can be nurtured and encouraged to reach its fullest potentials of sporting excellence”, saying “the Sunday Oliseh’s, Stephen Keshi’s and so many other talents abound in the State.”

According to Onyeagu, the “sole essence for us is to help Delta State and individual proprietors of private schools to see how we can bring back sports development to where it was in the golden era of yester years.”

Onyeagu said the bank’s sponsorship was for the long term, stressing that Zenith Bank’s values of fairness, professionalism will guarantee future involvement.

His words, “Everything we do we do with all our hearts, with a whole lot of commitment. Asking that if we are in the long haul is akin to asking are we doing touch-and-go? It is not a case of touch-and-go. We are going to be in the long haul. What we crave for is for fairness, professionalism, we will not encourage hooliganism, mercenaries for as long as it is developed, nurtured professionally be sure that this partnership will be for the long haul.

He said one of the aims of the Principal’s Cup was to help improve schools sports in Delta State, especially in public schools.

His words,” We all know the importance of sports in education and in the development of the child and so as much as we will like to ensure that academic prowess is given its rightful position, sports and extracurricular activities play very important role in the development of a child. One of the things we set out to achieve was to see how we can improve school sports in Delta State, especially in public schools”.

Managing Director, Hideapluxx , Tony Oritse-Pemu , said he was motivated to provide a platform to showcase their talents , in a bid to help youths channel their talents from social vices into productive ends.

He said the Zenith Bank Principal’s Cup is a junior tier football championship for all public/private schools, adding that it is a project to revive football at secondary school level.

Pemu said the competition was created to “create a long career presence for youths in their football life ,squeeze down societal vices and homeland crimes which is often inspired by high idle time and very importantly it is designed as a means of encouraging academic excellence”.

The goal was scored in the 52nd minute by captain of the side Chibuike Obiora following a swift counter attacking move.

Despite the best efforts of the Zappa team they could not turn the tide.

PICTURES: RSS In Search Of Doctor Who Jumped Into Lagos Lagoon