You only saw cleavages, Moyo Lawal fires back at critics

Coming after a photo shoot to promote make-up pallete, Flawless by Mimi, where reports claimed she posed nude, Moyo Lawal, has said it is not true.

“Was not Nude, Ya all need to chill especially the hypocrites that I see in bikinis all the time,” she wrote.

“Here are the Facts!!! (1) I was not nude neither can you see anything apart from cleavage which you will probably still see from me. Also of course I was terrified have you ever tried to create a nude illusion picture?? I was almost peeing in my pants and trying my best to still make the picture look believable.” 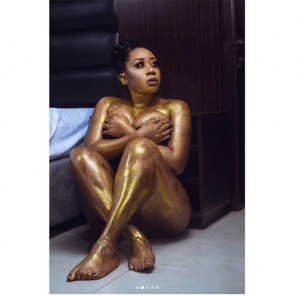 The media was agog recently when Moyo uploaded the pictures which despite some boos from her fans, was commended by some of her colleagues for bringing the advert to life. The actress said people were reacting to the new photo shoot because they have not seen her in such wear in the past.

“You have never seen me in a bikini, which means you have actually never even seen me as undressed as most females you have seen on social media,” said Moyo.

“As for me liking attention, I laugh in Spanish, am off social media more than am on it.”

The actress also denied that she had done a body enhancement.

“My body is 100% natural, how on earth do you compare a natural body to a surgical enhanced body??? Kim k is not my role model, please where have you ever heard me say that? Or even write that? I was not nude as you can obviously see in the picture above, different posture… I make bold to say, I see literally naked bodies on social media every other day. Either a lingerie or beach or pool or bathroom shoots.”