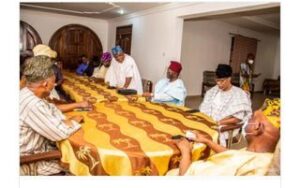 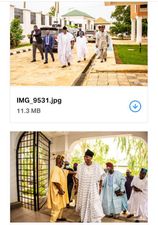 In continuation of his strategic contact and consultations toward promoting unity among political leaders in the South West, former Governor of Ogun State, Otunba Gbenga Daniel on Sunday paid a scheduled visit to the Ila Orangun Country Home of former Governor of Osun State and APC leader, Chief Bisi Akande.

Both leaders agree that unity among major political leaders and players in the region cannot be overemphasized, especially as the country marches towards the 2023 general elections.

Otunba Daniel described Chief Akande as a great leader and major force to reckon with in the politics of the South West especially; he therefore solicited for Chief Akande’s support in the task of bridging all political interests in the region.

“I think the missing link in our politics is about engagements. We need to engage one another; we need to look at matters and issues even from the perspectives of those agitating for self-determination; we need to understand and appreciate their frustration, but above all we must be able to engage them and share alternative perspectives so that they can understand that we are better off as a country, but in a fair, just and equity nation where everybody will have equal opportunities “

Chief Akande in his own reaction commend the efforts and initiatives of Otunba Daniel and said he has no doubt in his ability because he knows that the Ogun State former Governor has a Progressive foundation for so many years.