As patients groan and many mourning their loved ones who have died as a result of the protracted strike by Joint Health Sector Unions, JOHESU, which commenced midnight of Tuesday, April 17, 2018, LeadersNG exclusively gathered that the Ministry of Health has concluded arrangement to send a delegation of over 40 persons to the 71st Session of the World Health Assembly, happening in Geneva, Switzerland.

The World Health Assembly is scheduled to take place in Geneva, Switzerland from 21st-26th May, 2018.

In a Memo which was exclusively obtained by LeadersNG with Reference Number: C2483/III/ written by the permanent secretary, Federal Ministry of Health, Osarenoma Clement Uwaifo to the Honourable Minister of Foreign Affairs requesting for the accreditation of over 26 persons who have been appointed, authorized and empowered to represent Nigeria at the conference.

A source at the Ministry of health who preferred anonymity told LeadersNG correspondent that many of the people who are on the list including their aides who will be traveling alongside with them have no business being there.

The source further stated that many of the people on the list, including Committee Chairmen from the Senate and that of House of Representatives are only going because of the estacode that comes with the trip.

Many of those traveling LeadersNG learned will be paid minimum of $10,000 (Ten Thousand Dollars) each excluding their hotel bills, flight tickets and other Miscellaneous expenses.

A total of $400000 (Four Hundred Thousand Dollars) which is about ₦144000000 (One Hundred and Forty Four Million Naira) will be expended on estacode.

The source said, a total of over Three Hundred and Fifty Million will be spent on the trip.

On Hotel accommodation for delegates, the source said the ministry has pegged N50Million. Many of the delegates will be staying around the venue of the General Assembly and some of the Hotels cost $500 per night.

Estacode per day is at $900 per person and many of the delegates will be there for the Extra-Ordinary sessions which will last for two weeks.

The source said why would the ministry go on a jamboree trip to Switzerland at a time that the health sector in the country is currently grounded with many patients languishing in Hospitals across the federation.

When contacted on the phone to give details about the extravagant trip of Nigerian delegation to the World Health Assembly, a Special Adviser to the Minister of Health declined comment as he said he was not authorized to do so.

The striking health workers consist of about 90 per cent of the total health workforce.

The workers are demanding, among others, adjustment of the Consolidated Health Salary Structure, CONHESS; implementation of court judgments and upward review of retirement age from 60 to 65 years, arrears of skipping of CONHESS 10, employment of additional health professionals.

See the Memo from Ministry of Health to Foreign Affairs below: 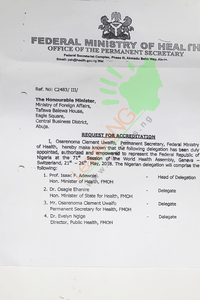 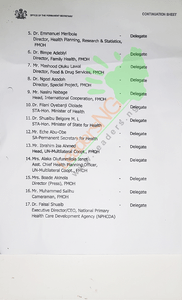 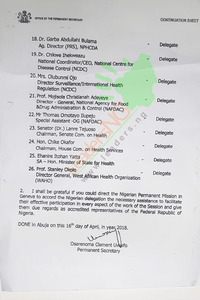