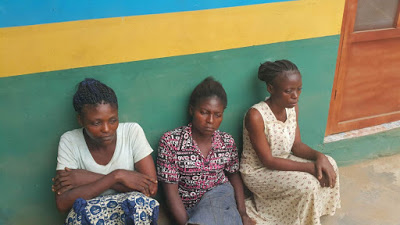 A 37-year-old woman, Rukayat
Basorun, has been arrested by the police in Ogun State in connection
with the alleged murder of her lover.
Two friends of the suspect,
Omobola Shodimu and Aanu Owoade, were also arrested by the state command
for conniving with her in the crime.

The state Police Public
Relations Officer (PPRO), Abimbola Oyeyemi, said in a statement that the
suspects were arrested in Simawa, Sagamu Local Government Area of the
state.
Oyeyemi, an Assistant
Superintendent of Police, stated that Rukayat and her accomplices
conspired and secretly dumped a corpse in the bush.
He explained that the corpse was that of Rukayat’s lover, who reportedly came to spend some time with her.
The police spokesman, however, said the lover died in suspicious circumstances in the house of the suspect.
Oyeyemi said: “The suspects were arrested when information got to the police that they secretly dumped a corpse in a bush.
“The DPO Ogijo Divisional
Headquarters, SP Tijani Mohammed, who received the information, led his
men to the area at Mamugba village, Simawa where the main suspect
Rukayat Basorun was arrested.
“Investigation revealed that
the deceased happened to be Rukayat’s lover who came to spend some time
with her but died in a suspicious circumstances in the house of the
suspect.”
Previous Post