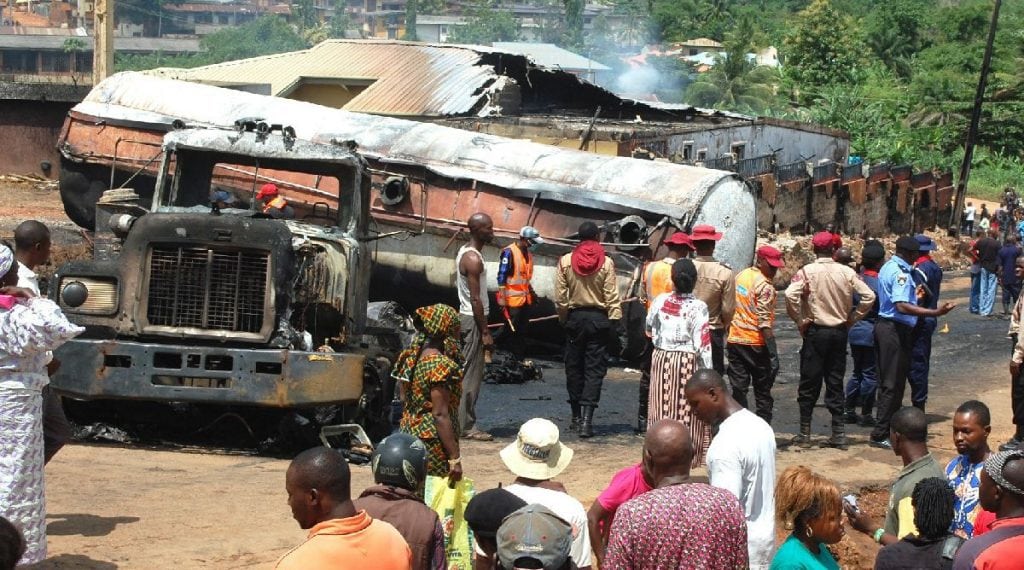 Tragedy on Wednesday befell residents of Eleyele-Ologuneru Road, Ibadan, Oyo State capital, when an articulated lorry laden with diesel lost control while ascending an elevated section of the road, falling on a car, and killing a woman.
The fire that subsequently erupted from the crash burnt another car, a church and several other properties worth millions of naira.
‎Sources told New Telegraph that due to the inability of the lorry to ascend the hilly road, it forcefully descended and the head of the trailer detached from the trunk while the trunk crushed a Nissan Almera vehicle in which the hapless and unidentified woman was.
The church belonged to the Save and Serve Ministry which was completely burnt without redemption of any item. Aside this, a bungalow building belonging to a former Commissioner of Environment and four other buildings that the diesel spilled into, also got burnt in the inferno.
A newly renovated, tastefully furnished residential bungalow with property worth millions of naira including a wine coloured Mazda car with registration number LSR 208 EJ and other valuables were equally burnt beyond imagination.
The rescue team, involving policemen, men from Department of State Security Services, Nigerian Security and Civil Defence Corps, Federal Road Safety Corps and men from the State fire Brigade Service, all tried fruitlessly to identify the mangled woman or any other thing that could reveal her identity. It was wailing and gnashing of teeth by men and women sympathisers at the scene.
A resident in the area who identified himself as Elder Lekan Durosaro said the accident happened some minutes before 12 noon and that upon its rolling over the Almera car, it caught fire.