The security operatives who sealed the Abuja office of a cable and
satellite broadcaster, CoreTV, early Friday morning were not from the
State Security Service, PREMIUM TIMES has learnt.
The operatives
were from the Mobile Unit of the Police, witnesses said, out to enforce a
quit notice arising from a land dispute decided by the Supreme Court.

Workers
had arrived the television station along Sokode Crescent, Zone 5, Wuse
in Abuja on Friday morning to discover their offices broken into and
their broadcasting and other equipment allegedly carted away.

Following
the discovery, Olajide Adediran, the Managing Director of CoreTV, had
told PREMIUM TIMES that the operatives had shut down the station and
barricaded the area during the operation around 4:00 a.m. Friday, even
though the media house had no history with the secret police.

But
it later emerged that the broadcast media organisation was caught in a
dispute over the land on which the building housing its rented office
was constructed.

Three buildings, including the plaza where CoreTV had its offices, were sealed in execution of the quit notice.

A
cameraman with CoreTV, Adeniyi Adeshina, told PREMIUM TIMES that the
operatives arrived the location with some hoodlums and evacuated the
properties in their building.

“I left office at about 10 p.m. last
night without any sign of a quit notice. At about 6:a.m when I assumed
duty today, I saw a notice on the building’s main entrance stating that
we should evacuate the building within 12 hours of the notice,” Mr.
Adeshina said.

It
is not clear why the police did not give adequate notice to the
occupants of the building before the eviction and why their properties
had to be broken into, damaged and stolen.

The dispute over the land had been on since 1996 until it was decided by the Supreme Court.
Apart
from the U.L.O Plaza in which CoreTV had its offices, two other
buildings occupied by several businesses were forcibly evacuated on
Friday.

The exercise led to damages to the buildings and loss of valuable items in the offices and business centres located in them.

MEDIA NOT PRIMARY TARGET
Mr.
Adediran also confirmed to PREMIUM TIMES Friday evening that CoreTV was
only caught in the controversy of a long-standing dispute over the
ownership of the property amongst two different landlords.

He also
confirmed that police officers conducted the raid and not operatives of
the State Security Service as he had earlier stated.

“A few
witnesses around the neighbourhood told me that the men were from the
SSS,” Mr. Adediran said. “Unfortunately, that turned out not to be
accurate.”

“They’re actually police officers and acted based on a
court order that granted one of the parties fighting over the property
the power to possess it,” he added.

Mr. Adediran said his medium was not the primary target. 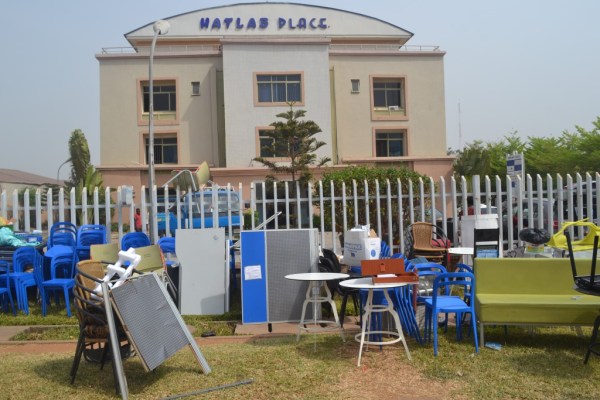 “No,
we’re not being particularly targeted,” he said. “This is because other
offices in the premises were raided and their items also taken away.”

But he expressed strong reservations about the timing of the police action.

“It was clearly not properly timed. They should not have done this in the dead of the night.”

Mr.
Adeniran told PREMIUM TIMES the police moved computers, digital
cameras, and other files from his offices during the operation, which
took place around 4:00 a.m. Friday.

When contacted, the Abuja Police spokesman, Anjuguri Mamza, said he was not aware of the raid.

Coca-Cola Plus: New Coke with fibre could be healthiest yet

Coca-Cola Plus: New Coke with fibre could be healthiest yet