‘when God blesses you, it is not for you to keep it to yourself but to also use it to bless others’ CAPTAIN HOSA 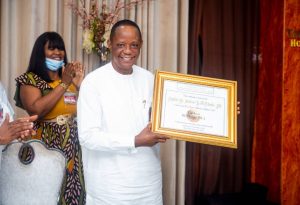 At the Philanthropic Roundtable and Forbes Africa Awards 2020 presentation held virtually last Friday, Captain Idahosa Wells Okunbo, Chief Executive Officer of Ocean Marine Security Ltd. emphasized that giving to the poor and expecting accolades was not the type of philanthropy he would like to be associated with. Captain Okunbo, who was the first of the recipients to speak on their activities before the worldwide audience, said he prefers to do ‘quiet philanthropy’, unlike the noisy one associated with foundations that people set up to drum up publicity about themselves. He declared: ‘God told me not to set up foundation so I am not the type to celebrate the philanthropy that I do; therefore I do it in a quiet way.
I believe that whatever one does in secret will be rewarded by God’. Capt. Hosa, as he is fondly called, said ‘when God blesses you, it is not for you to keep it to yourself but to also use it to bless others. Beneficiaries may talk about my philanthropy but I do not need to talk about it myself because it is not by my power but by the grace of God that I have achieved all I have in life. It is good to leave a legacy within the community and environment we operate’. He disclosed that a lot of philanthropy he does is in providing employment for people, especially and youths and women, in the area of agriculture which he has embarked upon in a big way. By employing them, he explained, they are empowered and they can then take care of themselves and others.
The industrialist and philanthropist noted that there is a lot of arable land in Africa which can be utilised for agricultural purposes that will provide jobs for thousands and millions of people and this is why he has concentrated on agriculture which easily provides gainful employment. ‘I believe that if the youths and women are empowered in agriculture, they can earn a living and integrate themselves into the society. We need to learn to think of others, instead of ourselves, with what God has given us’.
Captain Hosa dedicated the Forbes award to the youths and all those he has impacted on with what God has given him. Speaking in the same vein, Governor Dapo Abiodun of Ogun State, who was a guest, noted that some philanthropic gestures are misdirected, stressing that donors should always ensure that what they are giving is what the recipients need and would appreciate. He said that the COVID-19 pandemic had caused much harm to the population, but he was glad that several corporate organisations and donors had risen to the occasion to support state governments during the period.
Governor Abiodun commended Captain Hosa whom he described as his friend and brother and wished him and other awardees well in their endeavours. The other two recipients of the Forbes award were Mahmood Ahmadu, Founder and Executive Chairman of Online Integrated Solutions Ltd. and Adesola Kazeem Adeduntan, Managing Director of First Bank Nigeria. Other speakers during the ceremony included Baroness Martha Osamor, Former Nigerian Minister of Industry, Mrs. Onikepo Akande and Mrs. Olayinka Fayomi, Chairman of FIN, the joint organisers of the event while the moderator was foremost UK journalist, Nick Kochan.
The online roundtable discussion was supported by the World Philanthropy Network and had as its theme, ‘Harnessing the Financial Resources and Social Capital of Philanthropy to Making a Lasting Impact’.
Previous Post