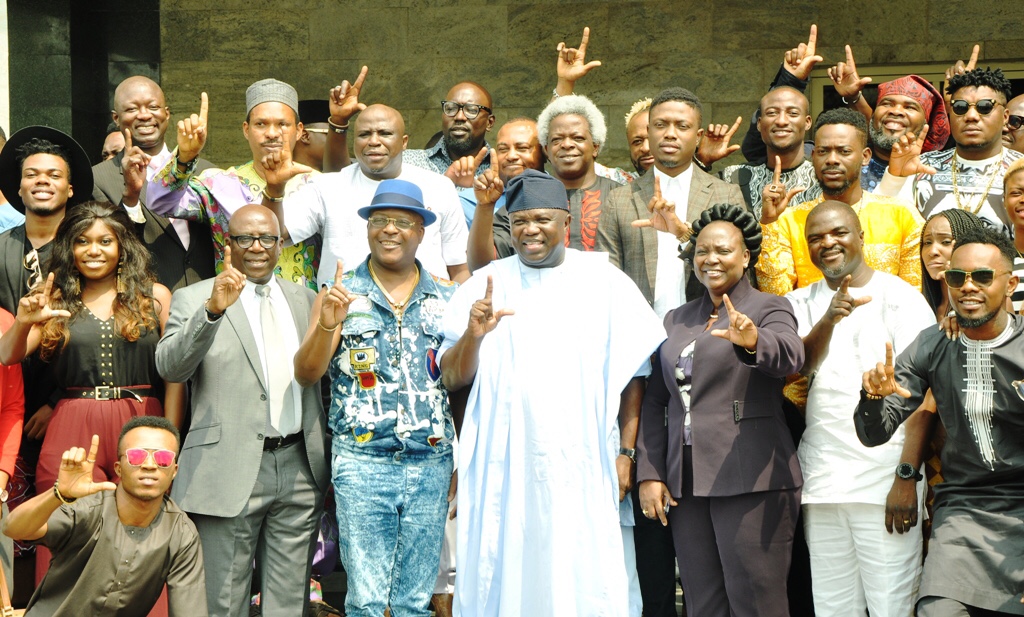 Lagos State Governor, Mr. Akinwunmi Ambode on Tuesday revealed plans of his administration to leverage on the vast economic opportunities in entertainment, tourism and arts sectors, among others to grow the Gross Domestic Product (GDP) of the State and promote talents in the State to compete globally. 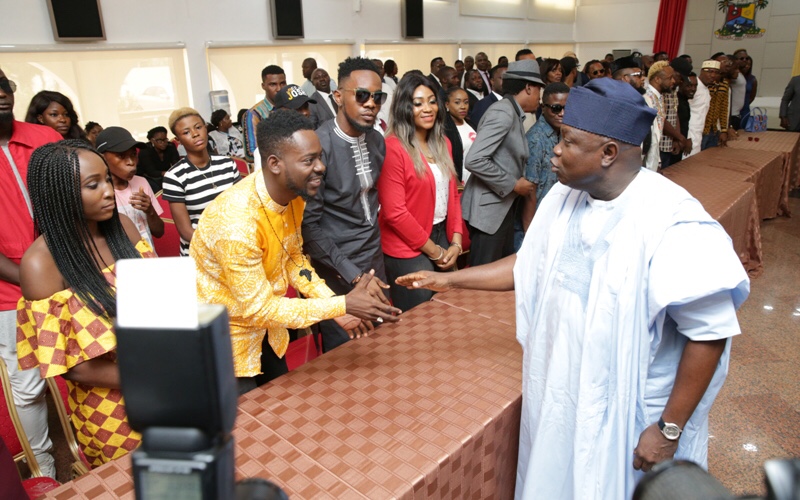 Speaking at Lagos House, Ikeja when he received artistes who performed at the One Lagos Fiesta (OLF), who were on a thank-you-visit, Governor Ambode said the creative industry remained a veritable platform to grow the economy, and that government would tap into it and use it to positively engage the bulging youths in the State.

The OLF, which is an annual end of the year revue put together by the State Government, held simultaneously in five different locations across the State from December 24, 2016 to January 1, 2017, and it was adjudged to be very successful with participation of a-list artistes from different genres of music. 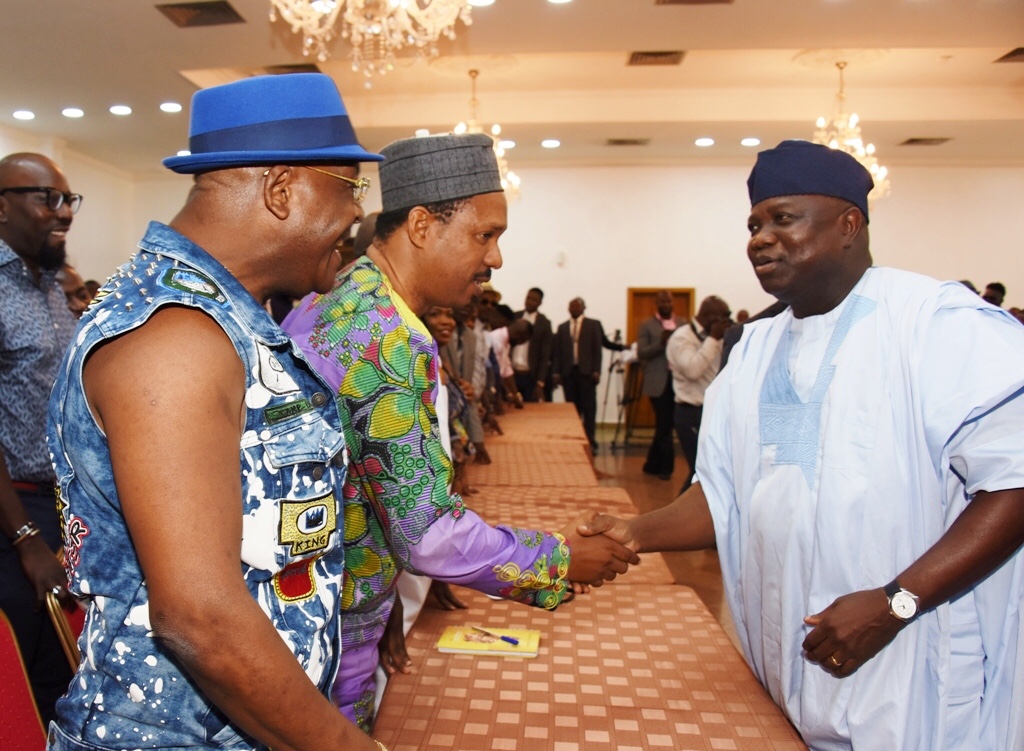 The Governor, who thanked the artistes for their partnership with the State Government, said the OLF was a platform put together by his administration to majorly create awareness about the potentials inherent in the entertainment industry, especially in using it to grow the economy and positively develop talents that abound in the country.

He said according to statistics, the State recorded the lowest crime rate during the period of the OLF, saying that the artists contributed significantly in keeping the city secured and scale up the international rating of the State as a safe place. 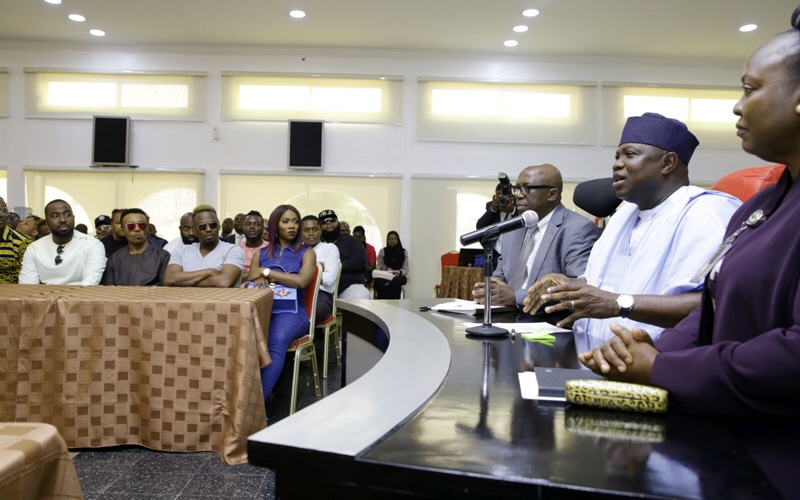 He recalled the Project T.H.E.S.E (Tourism, Hospitality, Entertainment, Sports for Excellence) which was part of campaign promises to Lagosians, saying that his administration remained committed to using the initiative as well as the OLF to grow the economy of the State.

He said: “We have a bulging youth population dynamics in Lagos. 66 per cent of our population are below the age of 35 and if two third are of below 35, it means there is an economy in that age bracket that government is not seeing. The OLF was used to test run how to bring people together.

“The issue now is beyond OLF, how do we now take that opportunity to become a catalyst for this partnership? On my part, I want to reiterate my commitment. This is an area I love which is underutilized for the societal development of the country.

“Government is now willing to use your industry to grow its GDP because so far entertainers are working, we would have more visitors coming to Lagos; they will stay in our hotels; they will buy clothes; they will go out in the night and buy our drinks and the ultimate thing is that more taxes come in for the state.

“So, there is a concentric cycle around the energy of entertainers and so what I want is a structured framework. What is it that we should do as government to grow the industry? Why should we go and be doing video shoot in South Africa for instance? I want a win-win partnership not just to use artistes and dump them till another December. I want a year-round partnership that is built around a framework,” he said.

Going forward, Governor Ambode tasked artistes to come up with a structured framework to grow the economy, while government will provide infrastructures and initiatives to help the sector.

“The challenge for our artistes now is to come up with a framework of how government can intervene. We are willing to support and we are willing to draw up a programme to support you but how do you want to fuse into that to make Lagos the entertainment hub in Africa? That is the challenge but I want to thank you for honoring us,” the Governor said.

Many of the big names in the entertainment industry including Queen Salawa Abeni, Adewale Ayuba, Tiwa Savage, Adekunle Gold, Sir Shina Peters, Sound Sultan among others, lauded Governor Ambode for the OLF initiative and his commitment to grow the industry.

Re: Ladi Adebutu Sets to defect to APC in Ogun