Tragedy was averted by providence on Sunday at the University of Benin as a professor of English and Literature, Tony Afejuku, escaped death by the whiskers when a tree fell and damaged part of his official residence at the Ugbowo campus of the university, Edo State.

Afejuku said he was reading under the tree but stepped away from his location to the front of his house few minutes before the tree fell. Many other buildings within the university were also affected by the rainstorm. 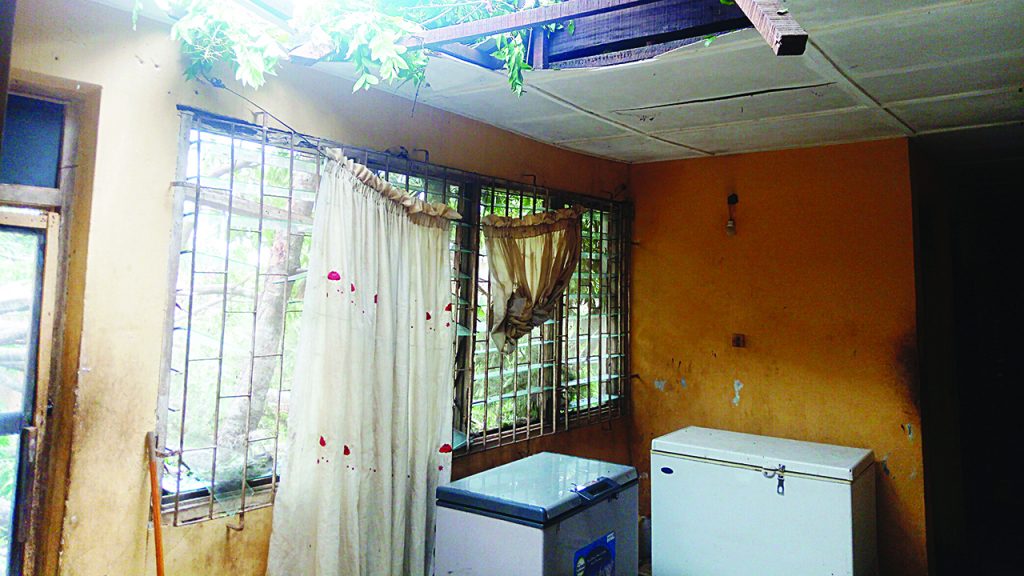 Some of the buildings affected included the new Senate building, the university library, several faculty buildings, boys hostel and other houses in the residential quarters.

Afejuku told journalists that he was reading a book on genocide against the Igbos under the tree not knowing a ‘genocide’ was about to happen in his house.

“I called the place my tree of contemplation and meditation. I used to stay there and read during the daytime and most evenings. I just finished reading newspapers and I started reading a book on genocide against the Igbos written by Jimanze Ego-Alowes.

“The storm started slowly and it gained momentum. An inner voice told me to move. It was not up to two minutes I stepped away when I heard a crashing noise. The big tree fell right where I was sitting and damaged part of the house at about 6:00p.m. I have contacted the university authorities. A boys quarters behind me was damaged and other buildings within the campus. I have been living here since the early 90s.”

The Public Relations Officer of the university, Michael Osasuyi, said the Vice Chancellor, Prof. Faraday Orumwense, led a team to access the damage caused by the rainstorm and that the VC has appealed to relevant agencies to support the university to rebuild damaged property.

The Vice Chancellor yesterday called on the federal and state governments for financial assistance to the institution following a rainstorm that damaged some buildings in the Ugbowo campus. Orumwense made the appeal during an on-the-spot-assessment to the affected buildings.

Orunmwense said the havoc wrecked on the buildings was enormous, noting that urgent attention is needed to commence repair to enable students learn in a conducive environment.

“It is unfortunate that the damage done is so enormous. The effect is so much and we need the help of both states and the federal government. So many roofs were removed and the buildings affected are not conducive for learning,” he said.