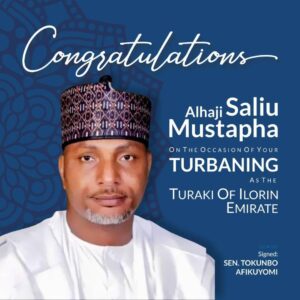 The Royal Turbaning of Alhaji Saliu Mustapha as the Turaki of Ilorin by His Royal Highness, Alhaji (Dr) Ibrahim Sulu-Gambari, CFR, is a worthy recognition of Alhaji Mustapha’s contribution to nation-building, according to Senator Tokunbo Afikuyomi, a long-term associate of the new Turaki.
Afikuyomi stressed in a statement that Alhaji Saliu Mustapha has been conscientious in politics, and painstaking in humanitarian services, not just around the people of Ilorin Emirate alone, but in the entire Kwara State and in Nigeria as a whole.
According to the Senator, who once represented both, Lagos Central Senatorial District, and Lagos West Senatorial District. Mustapha’s decent politics, maturity and candor have combined to portray him as a rare breed amongst the pack, which is why he is often welcomed in any circle he has pitched tent with.
“He has a great sense of fairness, comportment and is also result oriented. A loyal friend, with a god-fearing disposition, he passes as one of the most respectable public figures from Kwara State,” Afikuyomi added.
The senator summed that with his turbaning as the Turaki of Ilorin, he was confident that he will impact on the people of the peace-loving emirate, in line with the vision of His Royal Highness, and the expectations of citizens.
“May God almighty give him the wisdom, good health and longevity to deliver the much-needed goods for his people, his fans and for humanity at large. Congratulations to a good friend,” the Senator concluded.