by metronews
in Careers, News, Opinion
0 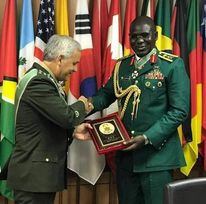 When President Muhammadu Buhari appointed the then Major General Tukur Yusuff Buratai as the Chief of Army Staff (COAS), those who were familiar with him said his appointment could not have come at a better time. It was a time the dreaded Boko Haram insurgents had instilled horror in the mind of Nigerians while the military was losing its officers and men in large numbers. The Nigerian military regarded as one of the best in the world had become the butt of jokes even among Nigerians.

Prior to his appointment as the Chief of Army Staff in July 13, 2015, a large section of Nigeria was under the grip of Boko Haram. The insurgents were controlling a lot of local governments in Borno, Adamawa and Yobe States. They were so bold in their evil undertaking that, even the local government of the former Chief of Defence Staff, the late Air Marshall Alex Badeh, was under the command of Boko Haram and his hometown used as their command base.

Suicide bombings by Boko Haram were widespread in the northern part of the country particularly Kaduna and Abuja. The media was not spared either. The office of a national newspaper, This Day, was bombed by the insurgents.

Meanwhile, within three months of his appointment, General Buratai demonstrated his leadership capability by showing that he indeed understood the terrain of the North East, the epicenter of the insurgency, having been born in Buratai town in Biu local government area in Borno state, which also suffered brutal attack from Boko Haram. He took the war to Boko Haram and cleared the mess. As at September 2015, his soldiers had recaptured and pushed back the insurgents from Gamboru Ngala, the area’s commercial centre, and hoisted the Nigerian flag in the town. At that time, bombings by Boko Haram were common in Maiduguri, the Borno State capital city. Buratai was able to put a stop to that.

General Buratai did not just beat back any further advance on Maiduguri by the rampaging Boko Haram, the insurgents were chased to their Sambisa Forest hideout where troops of the Operation Lafia Dole proudly displayed vital insignias of the sect including a Holy Quran and flags of the sect’s leader, Abubakar Shekau, on national television to the admiration of Nigerians. That indeed was a big setback for the insurgents’ campaign of destruction, from which they never recovered as a whole.

In terms of projects, capacity building, training and welfare, throughout Buratai’s tenure as COAS, there was never a dull moment.

It is on record that Buratai’s leadership style did inspire the fighting soldiers, a record-breaking template his successors would also find suitable to utilize. When he became the Nigerian army chief, he made it a duty to identify with his officers and men as they launched a full-scale war against the Boko Haram fighters. As an officer well-grounded in military tactics, records show that he led his men to victories defeating the insurgents who not only bowed but surrendered their weapons in disgraceful defeat. Besides, General Buratai, while he headed the Army, personally identified with his soldiers in their trying times. He is said to be the first military chief to be so concerned about his men in the war front.

When he assumed office in July of 2015, General Buratai wasted no time in setting the machinery in motion to decimate the Boko Haram insurgency. However, the new Army chief met troops whose morale in the battlefield was dampened by poor or lack of arms and ammunitions to battle insurgency; a condition further worsened by poor welfare packages of troops in the battlefront; arrears of unpaid salaries and allowances of army personnel and zero initiative on incentives to fighting troops. Subsequently, he kick started a tour

of Army formations, got briefs and set to work almost immediately to right the wrongs by setting in motion processes to stabilize the psyche of the battle-weary troops.

Inspiring and effectively leading subordinates, especially through a military mission with life or death implications, is no small feat. It requires leadership, one that extends well beyond the battlefield. This trait, evidently, Retired General Tukur Buratai possesses with an undeterred drive to accomplish noteworthy goals in any field of endeavour.

It bears repeating that General Buratai did not joke with the welfare of his officers while he headed the Army. He always made sure they were in right frame of mind in their duty. He is a man that would go to any length to see and meet their needs at every point in time. Under his leadership, priority was given to the equipment used by the military to combat the insurgents, among other steps taking by him. The allowances and bonuses of the military were paid as at when due.

It was vintage Buratai who continually ensured that his troops continued to receive utmost attention in terms of welfare. It was also to his credit that the troops in the North East were provided with constant water supply to meet their daily needs and to stabilize them emotionally and psychologically. As part of efforts to encourage his men, General Buratai on Tuesday July 25, 2017 approved the promotion of 6,199 soldiers involved in the fight against Boko Haram under his watch.

In the basic responsibilities of a leader which include accomplishment of the mission and the welfare of the soldiers, Buratai was not found wanting. He established Nigerian Army Farms and Ranches, built and commissioned block of flats at Jaji, Khobe Cantonment, Jos in Plateau State and the Danjuma Chalets at 2 Division Headquarters. The former Army chief also renovated a lot of projects he met on ground and initiated water projects including the Supply and Transport Foods and new Command Guest Houses.

Buratai has always displayed the zeal to excel and set records in whatever he does. His vast contributions to national, regional and international peace have not gone unnoticed here at home and abroad, which, obviously, led to his being appointed a non-career ambassador after a successful military career.

2023: I Have No Interest In Tinubu’s Presidential Ambition