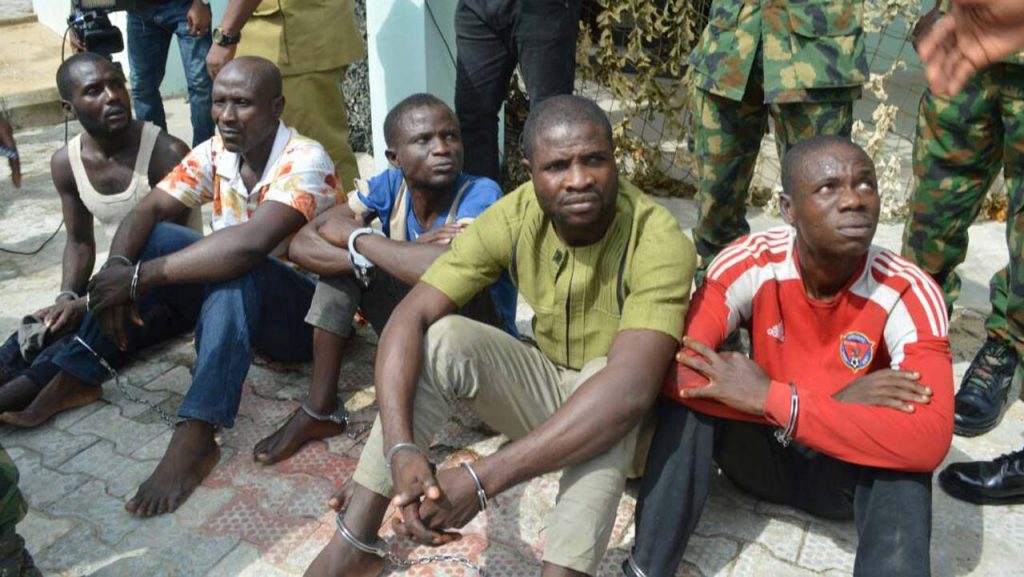 Troops of Operation DELTA SAFE have nabbed suspected vandals that detonated dynamites resulting to the breach of an International Oil Company facility located at TEBIDABA –OGBOINBIRI – BRASS pipeline in the outskirt of IMGBIBA Community of Southern Ijaw Local Government Area of Bayelsa State.
The arrest was disclosed by Commander Operation Delta Safe Rear Admiral Apochi Suleiman during a press conference held today at Headquaters Operation Delta Safe in Yenagoa, Bayelsa State. He stated that “following the incident, troops acted on a tip off spotted suspected hideout at a fishing camp along ISONOGBENE where 3 suspects namely; Mr Ayebemi Dressman, Mr Inimotimi Abule and Mr Epemege Frank were arrested in connection with the vandalism at PEREMABIRI Community of Bayelsa State”
Rear Admiral Suleiman who was represented by Colonel Danjuma Abdullahi added that during a Similar operations, troops deployed at BENESIDE location in Ekeremor Local Government Area of Bayelsa State also apprehended 2 suspects, Mr Bibowa Anemi and Mr Ngoriduwa Gomogo alledged to have been responsible for sabotage and theft of wellhead 6 actuator device, an oil wellhead tool belonging to one of the International Oil Companies. Their criminal action led to disruption of the operations in the oil company. The wellhead is currently under repairs.
He revealed that in another development, troops deployed at Omuku Forest in Rivers State acting on a tip off swiftly responded and engaged some suspected armed kidnappers in a gun duel leading to rescue of the kidnapped victim and death of 2 of the kidnappers. The rescued victim is currently receiving treatment in a medical facility in Port Harcourt.
According to the commander “ troops raided a suspected pirate’s hideout at Elema, Rivers State. Although, no arrest was made during the raid, several items were recovered. The items include; 23 rounds of 7.62mm Ball Special ammunition, one generating set and 40 Horse Power Suzuki speed boat engine amongst others” he said.
He used the opportunity to commend the general public and the press for all the support given to Operation DELTA SAFE in its effort to protect oil and gas infrastructure, deter and prevent militancy, sea robbery, crude oil theft and other forms of criminality within the joint operations area that could impact negatively on economic activity in Niger Delta region.
Rear Admiral Suleiman appealed to members of the public to provide timely information to troops in order to get rid of notorious criminals from the region.