In the spirit of the recently-held International Women’s Day, celebrated velvet-voiced Islamic singer, Alhaja Ruqoyaah Gawat-Oyefeso has lent her weight behind the call for the rights of women in nation building without any encumbrance. 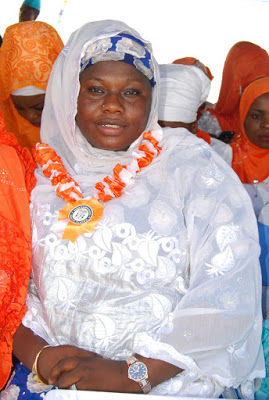 To this end, the highly spiritual singer, in collaboration with some of her like-minded friends Alhaja Tawakalitu Adunni Olorire, Hajia Monsurat Ojonla, Hajia Aishat Umuh Niyass, put together an album entitled ‘Eto Obinrin’ (Rights of Women). The album symbolically dwells on the inalienable rights of women and their girl children. This, interestingly, is in consonance with the demand and agitation of different groups and NGOs during the last International Women’s Day.

Again, the album, ‘Eto Obinrin’ is in further celebration of women as the pillar of the home front and why they should not relegated to the background in the scheme of things by the men folk on account of their gender. The album will be released on the 13th of March, 2017 under stable of Okiki Films & Music Productions.

Recently, very industrious and meticulous Ruqoyaah was crowned the ‘Sheikha of Music’ at the Maolid Nabiyy and Award Presentation of Morkaz Ogombo in Ajah, Eti-Osa Local Government area of Lagos.

Alhaja Ruqoyaah, a graduate of Mass Communication from the Olabisi Onabanjo University, Ago Iwoye Ogun State, has distinguished herself in impacting good morals to women through her music. Ruqoyaah Gawat-Oyefeso, the daughter of popular NTA presenter, Alh. Rasaq Aremu Gawat remains one of the most patronized Islamic singers in town; she comes across as a likeable privileged, wealthy, and down to earth person. She won the 2016 Best Female Islamic Artiste of the year at City People Entertainment Awards and also clinched the 2016 Best Female Islamic Musician of the year at the IMAN Awards. She is adjudged to be the best among others now in the Islamic music world and she is definitely making a difference in the lives of the younger generation especially her female folk.