by metronews
in Crime, News, Politics
0 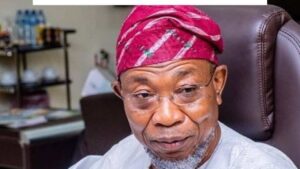 The House of Representatives has commenced a probe of the Minister of Interior, Rauf Aregbesola.

The Speaker, Femi Gbajabiamila, made this known on Wednesday.

Gbajabiamila is a staunch loyalist of Bola Ahmed Tinubu, a National Leader of the All Progressives Congress, APC, who has declared his intention to run for presidency in 2023.

This development is coming few days after Aregbesola publicly blasted Tinubu for turning himself into a god.

Gbajabiamila presided over the plenary on Wednesday, where members resolved that the interior minister and prisons chief, Haliru Nababa be probed.

They are being accused of misappropriating about N165billion funds earmarked for prisons development across the country.

The House resolution came as a result of a motion of urgent public importance moved by Ndudi Elumelu, who is the Minority Leader of the House.

“The House is disturbed that despite this Act and increase in budgetary allocations to the Nigerian Correctional Service to drive its renewed mandate, the tempo and quality of the service have remained the same if not retrogressing,” Elumelu said.

“The House is worried that the working conditions of staff and inmates’ welfare have deteriorated notwithstanding, the over N165 billion budget allocations to the service in the last two years.”

With this, the lawmakers resolved to have its committee on Reformatory Institutions investigate the allegations and report to the House within 12 weeks, for further legislative action.