This Dad's Not Playing: How To Punish Kids For Bad Grades 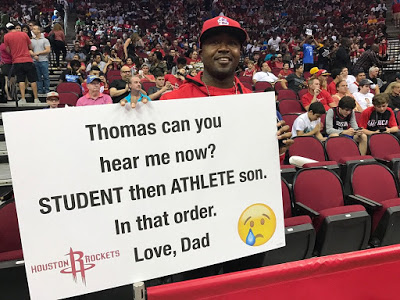 Usually a bad report card gets your cell phone taken away, or maybe you get grounded. Only your family and of course your friends know about your bad grades and the punishment.

But Thomas’ dad put it out there for everyone to see… in savage, professional-grade posters… at a televised NBA game… and the shots of him then of course lit the Internet on fire and now everyone knows poor Thomas’ problem and his punishment.

At the Cleveland Cavaliers vs. Charlotte Hornets game on March 24, his dad held up a poster making it clear that Thomas — who was probably watching the game at home — should have paid more attention to his schoolwork if he had wanted to come to the game. 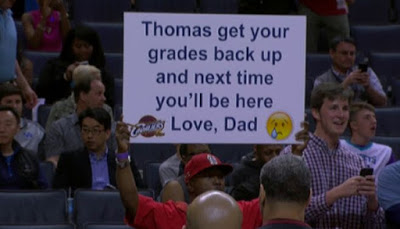 “Thomas get your grades back up and next time you’ll be here. Love, Dad,” the sign said.

It’s not clear if Thomas didn’t quite get the message or if he didn’t have enough time to boost his grades, but two days later at the Houston Rockets vs. Oklahoma City Thunder game, his dad was back with a new sign.

“Thomas can you hear me now?” this one began, just to make sure we all remembered this was Thomas of not-enough-effort-on-his-schoolwork fame. “STUDENT then ATHLETE son. In that order. Love, Dad.”

The dad told “Inside Edition” his signs “were dedicated to an audience of one! Just my son.”
“I wanted to give the attention to one person.”

The father, Tommy — who asked that his last name not be used — told “Inside Edition” his son got the message “loud and clear.”

CNN has not been able to reach Tommy or confirm his identity. And Thomas is probably hiding out somewhere, scrubbing his social media presence off line.

The dad’s efforts, of course, have brought cheers and jeers from the interwebs.

Some praised his public-shaming form of discipline, calling him “father of the year.” Others thought he was a bit too harsh.

If you’re still with us and curious… Tommy told “Inside Edition” his son hadn’t made enough efforts in his Mandarin class, among other subjects.

…then this happened: Married kenyan woman gets stuck with boyfriend while having sex

Do you remember the bald-headed model named Kedastif, she's really gone crazy! (Proceed at your own risk)

Do you remember the bald-headed model named Kedastif, she's really gone crazy! (Proceed at your own risk)