Yusuf Waheed, a 30-year-old commercial driver was during the weekend paraded by the Police in Ondo state for forcefully having the carnal knowledge of a female student of Obafemi Awolowo University (OAU), Ile Ife.

Mr. Waheed was apprehended by men of the Special Anti-Robbery Squad (SARS) following a complaint from the student. 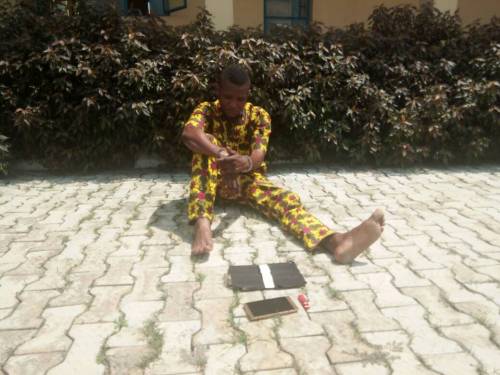 Femi Joseph, spokesperson for the Ondo State Police Command disclosed this to newsmen in Akure, the state capital that Waheed, a father of three, committed the offense on 25th of February 2018.

He also disclosed that the culprit was taking some passengers from Akure to Abeokuta but stopped by the bush to commit the rape when all the other passengers had alighted and he was left alone with the lady.

“After all passengers have alighted from his vehicle, Mr. Waheed was left with the lady (name withheld) and mediately drove to nearby bush.

“He brought out a knife and threatening the lady and disposed her of Infinix handset, Huawei IPad, cash sum of N4,000 and other valuable items.

“As if is not enough, Waheed forcefully had a carnal knowledge of the lady and she reported the case to the police in the station and we swung into action”.

He disclosed that the suspect was later arrested by the men of the Special Anti-Robbery Squad (SARS) in Ogun state.

“Search warrant was also executed in the house of suspect and one flash drive with cover of IPad of the victim, Sharon space bus marked KTU 989 CE which is object of the crime was recovered.

“Upon interrogation Waheed confessed to the commission of the crime and he will be charged to court after the conclusion of investigations.

During interrogation with journalists, the culprit (Mr. Waheed) blamed the devil for his escapade.

He said that he had been driving for over 17 years old and wondered what led him to commit the evil act.

“I had been driving for over 17 years and this kind of thing has never happened to me but I think it is devil’s work.

“I drive for almost 16 years in Abuja in which am not involved in any crime throughout of my stay.

“I have a wife and three children. I don’t know what comes over me, maybe it was because I relocated to Abeokuta”.

Sahara Reporters also reported that the Police paraded no fewer than eight other suspects for cultism and robbery.

Two of the suspects were the students of a popular secondary school in Ikare Akoko Area of Ondo state and belonged to both Aye and Eiye Confraternities.

Olu Olarenwaju popularly known as Olu Maintain led the detectives to Owo and Oka Akoko to arrest the cult members the various hideout.

Speaking further, Mr. Joseph added that the suspects would be made to face the law as their crime was against the state.

He also added that the Police Command had declared the war on all the criminal elements in the state.

Everything You Need to Know About Stormy Daniels Before 60 Minutes