There’s a new viral riddle that will haunt your dreams

Prepare to feel silly. Or very clever. Or perhaps even smug when by rights, you should just be feeling plain stupid.

Because the geniuses among us are about to be separated from the dunces thanks to another online riddle that’s going more viral than the dreaded Australian Flu.

The latest puzzle to have people scratching their noggins was posted to the Mumsnet Forum on 11 February and it has so far had almost 500 comments.

Scores of bamboozled mums, dads and maths obsessives have done their best to solve the riddle, which is as follows: 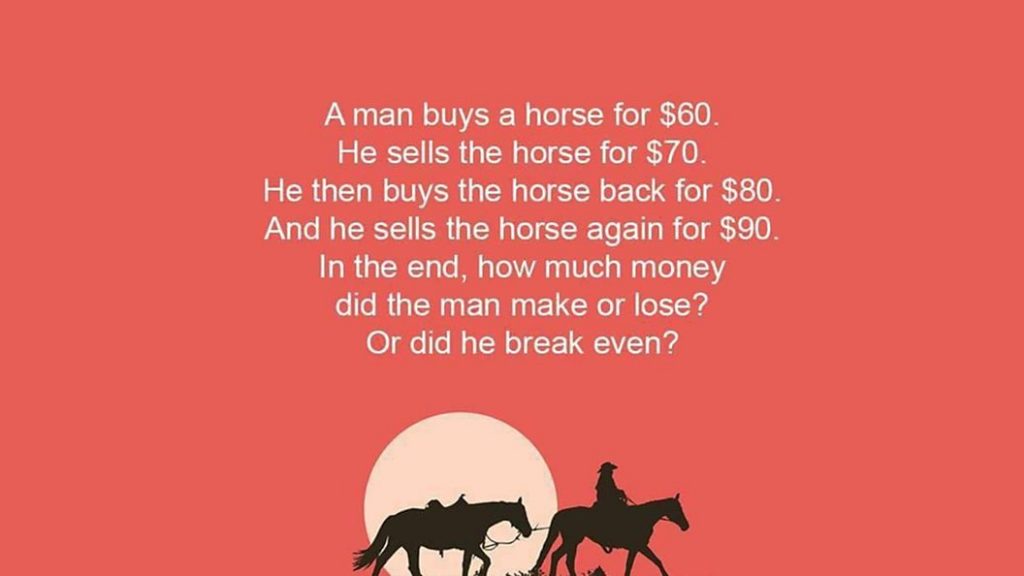 The comments on Mumsnet flit back and forth between these guesses, with some people even stating that the answer is £20 GBP. And that’s just confusing.

It seems that some people are getting tripped up by the fact that our horse entrepreneur sells his trusty stead for $80, having bought it back again for $70, so it seems a bit like he’s losing the profit he gained from his initial sale.

Some have abandoned all hope of solving it. One frustrated commenter wrote: “He’s just a bloody time waster, and that poor horse must have an inferiority complex being bought and sold so many times. I’m reporting him to the RSPCA.”