The Uber Driver That Endured Relentless Tirade From Passenger Gets Rewarded 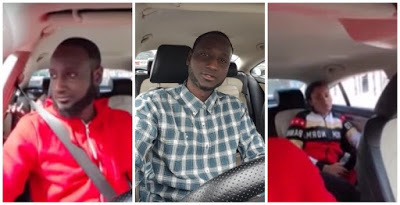 Recently, an ordinary Uber driver made international news headlines when
dashcam footage captured a rude, drunken passenger unleashing a torrent
of verbal abuse at him. The woman’s shockingly racist and hurtful
tirade could have sent anyone into a furious meltdown; but the
as-yet-unnamed driver remained calm and collected in the face of the
shocking language and threats of violent action.

The woman
featured in the video has since received a lifetime ban from the tech
company, and it’s hard to deny that it’s very much deserved. Many of us
who viewed the upsetting footage, however, might be wondering what
exactly happened to the poor driver after he endured that horrible
abuse.


This
unfortunate Uber driver became something of a celebrity last week after
he filmed the false rape accusation and racial epithets he endured from
a drunken customer, all because he didn’t have a phone charger in his
car. Since then, he has come out of the woodwork and featured in a new
video.
Sitting in the same car featured in the viral video, he states
that he met with Uber officials on Friday at the company headquarters to
explain the situation to them, and has been subsequently rewarded for
his stoicism.
As a token of the tech
firm’s appreciation, the driver’s bosses rewarded him with a lifetime
supply of phone chargers. “I bet I will never have a problem of a
charger anymore”, he stated in the video. He  added that he was given a
undiclosed sum of cash as a bonus, and was also commended for recording
the incident. Hopefully, doing so will encourage other drivers to
resolve issues with customers who report allegations to the police.

“I
didn’t trust that girl enough to turn off the phone and call the cops
and then turn it back on … she was already lying; she could say anything
she wanted when I turned off the phone,” he stated. “What she failed to
understand is that I came here legally. … I don’t do drugs, I don’t
drink. I don’t fight, I don’t be in trouble. I don’t do none of that
sh*t. I just work to make a living.”

He
added; “I got a message for every single Uber driver out there: You
better invest in a f*cking dashcam, bro, cause being an Uber driver is
putting your life in jeopardy if you don’t have a dashcam. It could save
your life. It saved my life.”

This isn’t the first time, however, that
the story of an Uber ride has gotten a lot of attention on social media.