The once boisterous home of the Minna, Niger State-based super-rich kidnap kingpin and dealer of stolen cars, Isah Maiturari, has suddenly become a ghost enclave.

Maiturari was recently apprehended by men of the Inspector General of Police (IGP) “Operation Absolute Sanity” at his residence at Sauk Ka Futa, a suburb of Minna, the Niger State capital.

Although Maiturari said to have over 35 houses scattered across the state capital of Minna and other neighbouring states, a visit by our correspondent to one of his private residence at Sauka Ka Futa on Mandela Road Minna showed a low key of activities around the house with nobody ready to talk to anyone.

A middle-age man this reporter met under a mongo tree opposite the house refused to say anything when asked if there was anybody in the house.

But when pressed further, he simply said in Hausa: “There is nobody in the house, and they asked us not to talk to anybody, if you want any information, please go to the police, he (referring to Maiturar) is with the police”. 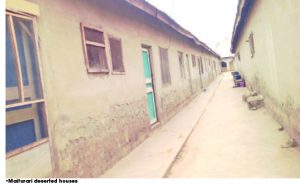 However, Sunday Sun observed that one of his tenant houses located behind the NNPC Mega station, along Hinma International School Road in Minna, was almost deserted as the tenants have moved out in their large number since the suspected kidnapper was arrested.

A visit by this reporter to some of his residential tenants flat apartments showed that only four tenants were currently occupying the houses.

The four said that they were yet to get a place and that was why they were still staying in the house.

“You can see that almost all the flats are empty because people have left. Security agents have been coming in and out of the place and we are afraid”, a female tenant, who did not want her name in print, said.

According to her, “the few of us you see around are seriously looking for houses and immediately we get one, we will move out because we are all scared. We didn’t know that our landlord was into such a criminal act.

“In fact, our tenancy has not expired, but we are all leaving because we are not save. We don’t want trouble”.

“I don’t think if I see him now I will still recognized him because I met him once. All this while, it is one of his sons that usually come to collect house rent.

“I was shocked when I heard that our landlord was arrested for kidnapping and dealing in stolen cars. I want to leave the house, but I have not gotten a place yet.

“Certainly, I cannot continue to stay here any longer. It is dangerous because nobody knows what will happen next”.

However, all attempt made to get Jimoh to know to confirm that Maiturari has been charged to court could not yield any result as he refused to pick several calls put across to him neither did he reply a text message sent to his cell-phone.