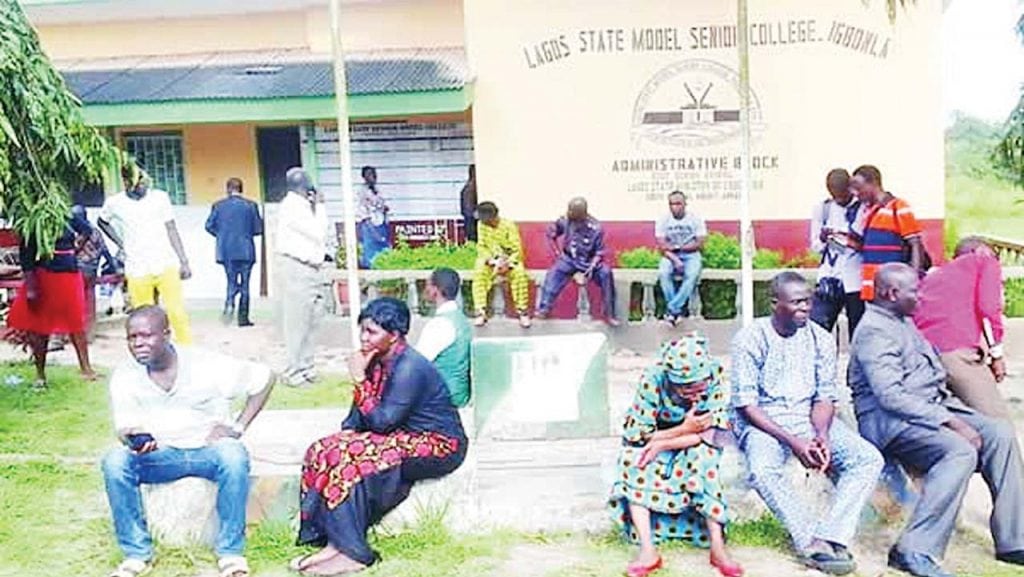 Worried parents are the school
For the umpteenth time, gunmen suspected to be militants yesterday morning invaded the Lagos State Model College, Igbo Nla, Epe, abducting two principals and six students.
The gunmen abducted the principal of the junior secondary school, simply identified as Mr. Oyesola and Mr. Akirinmade who is the principal of the senior secondary school.
Earlier in the week, the kidnappers had written to the school, informing the authorities of their plan to strike. The school management promptly notified the police, which sent its men to take strategic positions around the school.
However, eyewitnesses say the police were overwhelmed by the number of militants and the sophisticated weapons they carried. Last October, kidnappers attacked the same school seizing four students, two members of staff, including a Vice Principal.
According to sources, the militant have maintained visible presence in Epe for over two weeks. Residents said for about three days, they have suffered continuous strikes from the gunmen, adding that two people including a poultry farmer, who notified soldiers of their activities, have been killed.
They were said to have been patrolling the waterways and even challenged security operatives to a gun duel in a bit to distract them and waste their ammunition.
However, the operatives, residents said, did not give in to the militants display and successfully foiled their plot to kidnap some students on Wednesday.
Undeterred, the gunmen said to be clad in black attires and hooded stormed the school again around 6am, and took away 10 students from senior school.
They were said to have profiled the students on their way out and eventually released four of them, who said their parents were farmers, poor, late or phone numbers unknown.
At the school yesterday, angry parents protested the restriction of their wards to the hostels, insisting they must be taken home. The parents, who frowned at the school’s inability to provide adequate security, said they would not return their wards unless their demands were met.
They said they had asked the school to clear the bushes, erect a formidable fence, put a police post by the creek and also station an armoured tank there, but none was done.
They lamented that the school’s fence was weak, adding that the gunmen were able to break the wall with a log because of the feebleness of the walls.
Efforts to get the school authorities to comment failed, as officials said there was directive from the state government that no one should speak to reporters on the issue. The Permanent Secretary Education, who was at the scene, also declined comment.
Reacting to the kidnapping, spokesman of the Lagos State police command, Olarinde Famous-Cole, said: “Today, kidnappers around 5:00a.m. gained entrance into Igbonla Model School, Igbonla, near Epe and abducted six students. Investigation and rescue operation have commenced with the visit to the affected school by a police team, led by the Commissioner of Police.
“From the visit, it was found that the criminal elements used the Imeru/Iji waterway to access the swampy forest bordering the school, bore a hole on a part of the fence to gain entrance. The dastardly act of these criminal elements is nothing other than sheer wickedness as there is no justification whatsoever to abduct innocent children.
“The trauma being endured at this difficult moment by parents/guardians and relatives of the innocent children can be imagined. We, however, appeal for calmness to enable security agencies focus on rescue operations and apprehension of the suspects.”
Presenting the case to the House of Representatives, the member representing Epe Constituency, Wale Raji, appealed to the House to call on the Inspector-General of Police, Ibrahim Idris, and the Commissioner of Police in Lagos, Fatai Owoseni, to treat the case with utmost urgency.
The House suspended other proceedings to attend to the matter and asked the police to mobilize and rescue the principals and students. Yesterday’s abduction is one among many kidnapping cases recorded in the area in the last three months.
Just a few days ago, a Baale in Ibeju-Lekki Local Council was kidnapped. The Baale is still in the den of his captors, as N20 million ransom is being demanded for his release.

"Police Has No Right To Ask For Tinted Glass Renewal" (WATCH)

"Police Has No Right To Ask For Tinted Glass Renewal" (WATCH)