by metronews
in #SmartLagos, Featured
0 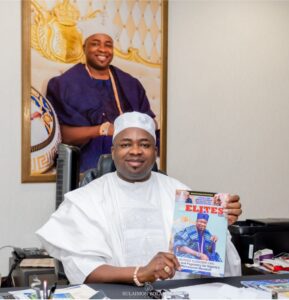 The ELITES editorial team, led by the publisher and editor-in-chief, Kemi Akinyemi, paid a courtesy visit to the modern and well-appointed palace of the Elegushi, to present the special edition to him.

Akinyemi extolled the monarch for his ground-breaking exploits in Ikateland and Lagos State. According to her, “The magic in Ikateland is no accident whichever way one looks at it. Rather, it is a product of one man’s drive, passion, commitment, and of course, resilience to make his people enjoy the good things of life. It takes a lot of guts and selflessness to serve the people diligently and what Oba Elegushi has done so far, is one good illustration.”

While responding, Oba Elegushi thanked the team for honouring him and commended the magazine for its great effort in celebrating the nation at 61; and by extension magnifying him as one of those who project Nigeria in good light.

In his words, “I want to sincerely thank The ELITES for deeming me fit to grace the cover of this special edition to commemorate our nation’s 61st Independence anniversary. Nigeria is our beloved country and we will always seek for its peace, prosperity and progress. We will strive to make it a better and safe place for all. I pray that the labours of our heroes and founding fathers will not be in vain.

Fondly called King Gushi by his admirers, Oba Elegushi has turned out to be an enigma of sort, just like Alexander the Great, a king of the ancient Greek kingdom of Macedonia. His reign as Kusenla III, which is just a little beyond a decade so far, has continued to generate excitement not only among his subjects, or within south-west, but across Nigeria and beyond. Each time he celebrates another year since his coronation, the blogosphere reacts, the social media kicks, and tongues begin wagging positively.

When one does well, people will constantly talk about him for centuries. Oba Saheed’s exploits in Ikateland have therefore qualified him to enter history books just like Alexander the Great, also known as Alexander III, who became the hero of a full-scale legend bearing only the sketchiest resemblance to his historical career.

It will be recalled that Oba Elegushi was crowned king eleven years ago when he was just 34 years old. Within a few years, he has turned around the fortunes of the small kingdom that it has now become one of the tourist spots to consider when visiting Nigeria.