At least five teachers, including a vice principal, were allegedly injured on Thursday, February 22, when students of Zappa Secondary School, Asaba, Delta State, embarked on a spontaneous protest over the transfer of the school principal by State authorities.

The teachers are said to have sustained injuries while attempting to stop the protesting students from going outside the gate, an effort that proved futile.

The enraged students allegedly pulled down the school gate, injuring the teachers in the process.

They are also said to have shut down the school and vowed to keep it locked up, saying that there would be no learning or academic activities until their transferred principal is redeployed.

Chanting war songs and bearing placards, one of the protesting said said “we will thwart every effort of any new principal sent to to us. If it is not our principal that we know, it will be no other principal.”

The situation caused pandemonium in Asaba metropolis, as the protesting students marched through the streets of the state capital to West-End Mixed Secondary School where they claimed their principal had been deployed. 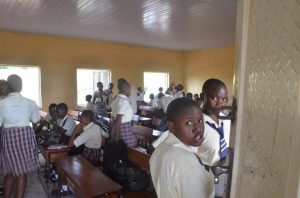 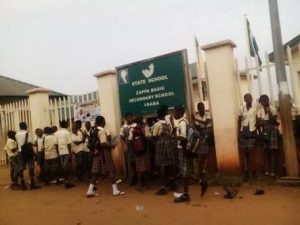 At West-End, students of the school prevented their entry.

But for the timely intervention of security operatives, there would have been bloodshed as students of both institutions were agitating to engage in physical attacks.

Contacted, the state Commissioner for Basic and Secondary Education, Chiedu Ebie, condemned the action of the students, insisting that they do not have the right to take the law into their hands.

“What do you think? Do they have a right to do that? I went to the school yesterday. I had the opportunity of meeting with the prefect of the school,” the Commissioner said.

“And they very much love the principal. They have good things to say about her, which is very heart warming and quite good. It’s good to know that; but then, unfortunately, they don’t have a right to tell me who their principal should be.

“They don’t have a right to protest. After they protested, they marched to Zappa Mixed in search of their principal, they went to West-End where there was a confrontation between them and the West-End students.

“Yes, they have good intentions and genuine love for their principal, but they took it a bit too far. And they don’t know that the consequence of their actions are far-reaching. They have rights but certainly they have limitations,” Ebie fumed.

“The labour of our heroes past shall never be in vain”.