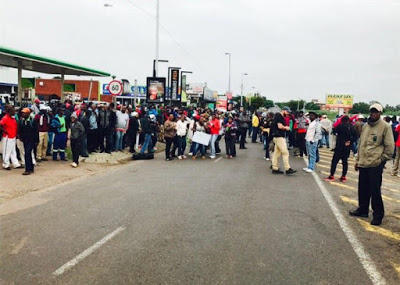 South African police fired rubber bullets and stun grenades to break up clashes between local protesters and migrants in Pretoria on Friday at a march against immigration.
Shops and homes owned by foreigners have been looted and torched in recent weeks, with some South Africans alleging that the properties were brothels and drug dens.

Attacks against foreigners have erupted regularly in recent years, fuelled by South Africa’s high unemployment and poverty levels.
Police in Pretoria formed lines to keep apart 500 protesters as tensions rise between some South Africans and migrants from Nigeria, Zimbabwe, Somalia, Pakistan and elsewhere.

“We are fed up with people bringing drugs to the youth and the crimes that go with it,” said a South African marcher who declined to be named.
As the stand-off continued, Clement Melfort, 26, a migrant from Zimbabwe who had come to see the march told AFP: “We are not afraid of fighting.”

President Jacob Zuma condemned the latest wave of xenophobic unrest, saying that there had been “threats of violence and acts of intimidation and destruction of property directed at non-nationals.”

“Residents in some communities blame non-nationals for the escalating crimes especially drug trafficking,” the presidency said in a statement on Friday.
Zuma called for South Africans not to blame migrants for the country’s widespread crime problems, but said the government would crack down on drug-dealing and illegal immigrants.
‘We are scared’


In the last week, more than 20 shops have been targeted in Atteridgeville, outside Pretoria, while residents in Rosettenville, south of Johannesburg, attacked at least 12 houses.

“We have decided to not to leave the house (during the march),” Alain Bome, a 47-year-old from Democratic Republic of the Congo who has been in South Africa for 14 years, told AFP.

“We know very well there have been attacks. We are scared.”
In 2008, South Africa experienced its worst bout of xenophobic violence, which left 62 people dead.

The Nigerian government this week called for the African Union to step in to stop “xenophobic attacks” on its citizens in South Africa, claiming 20 Nigerians were killed last year.

South African authorities dismiss such numbers, saying many violent deaths in the country are due to criminal activity rather than anti-immigrant sentiment.

In 2008, South Africa experienced its worst bout of xenophobic violence, which left 62 people dead.
In 2015, at least seven people died in similar unrest in Johannesburg and the Indian Ocean city of Durban as African immigrants were hunted down and attacked by gangs.

New Scam Alert: Can you hear me?

New Scam Alert: Can you hear me?