South African Man Who Was Raped By 2 Ladies Speaks: Here’s How It Happened

A Hluhluwe man has said he will not be able to forgive the three (the third one held the camera) women who ra*ped him.

A video of the incident appeared on social media and has since gone viral. 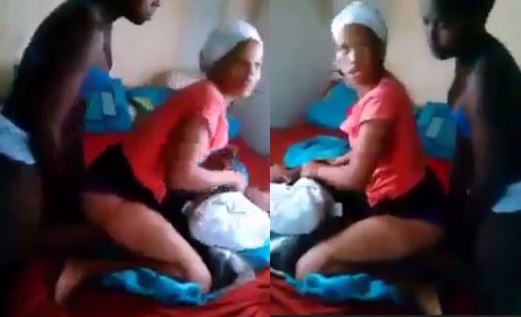 The man, whose name is known to the Daily News, said he was at home when a woman whom he knows called him over, saying she needed help with an electrical problem at her home.

“I went into her house and when I got there, I saw another girl in the room. I did not pay any attention to her. Then another girl who was hiding behind the door closed it, that’s when I realised that something was wrong.”
He said after they closed the door behind him, they told him they wanted to sleep with him.

“I initially thought they were joking,” he said.
However, he soon realised they were serious when he was attacked. He said he tried to defend himself but his arm was weak since he had injured it in an accident years ago.

He said he was let go and he went home and took a shower. He said the incident had left him feeling confused.

“I told my older sister about what happened but she thought I was joking.”

It was only after a video appeared online that she took what he said seriously and encouraged him to go to the police. He said he feared going to the police because he thought they would not take him seriously.

“When I told them what happened they were shocked. The three women were arrested the same day I reported the matter.”

The alleged rap*ists were people he knew and grew up with in the area, he said.

“I’m very angry,” he said of the assault. One of the families of the alleged rap*ists went to the man’s home to try to make amends, he said.
“My brothers and sisters were not having any of it,” he said.

He was looking forward to the trial and wanted the women to be severely punished. “People like that should not be part of society.”

What made it more difficult to move on was that the video was on social media and people had come to ask him what happened.

“It is something I never thought would happen to me. There is not much I can do but try to move on.”

According to Reese Mann, executive director of the South African Male Survivors of Sexual Abuse (Samssa), one out of six males before the age of 18 were sexually abused.

“Male victims of sexual abuse are less likely than their female counterparts to report incidents of sexual abuse, because police and the judiciary don’t take it seriously,” Mann said.

Mann said a widely held myth was that if males got an erection and/or, ejaculated during the se*xual abuse, they must have enjoyed it.

“A man being ra*ped can still get an erection because it is in the physiological make-up of males that if they are caressed long enough they end up getting an erec)tion,” said Mann.

He said there was also the myth that men should be capable of protecting themselves against se*xual abuse.

“There are three stages that any victim of se*xual abuse goes through, and they are called the three Fs.
“They can fight back, they can flee or they are just overcome by fear and the force exerted by the perpetrator, in which case they just freeze,” said Mann.

Police spokesman, Lieutenant-Colonel Thulani Zwane, confirmed the incident and said the women had appeared in the Hluhluwe Magistrate’s Court last Thursday and were expected to appear again on Tuesday for a bail application.

He said they were being held in custody.