by Alabi Micheal
in #SmartLagos
0

The Lagos State Task Force team on Human Trafficking and SGBV has been inaugurated by The Governor of Lagos State Sanwo Olu.

Sanwo-olu assured the Director General, National Agency for Prohibition of Trafficking in Persons(NAPTIP), Dame Julie Okah-Donli of his administration’s commitment and resilience towards the fight against Human trafficking and Sexual and Gender Based Violence.

The Governor reaffirmed that Lagos amongst one of the leading states who have domesticated the Child’s right act and VAPP, will not relent until the scourge is rid of and Offenders prosecuted accordingly.

The Director General, NAPTIP emphasized on the need for the state governments to continue to support the fight against Human trafficking and Sexual and Gender Based Violence and she thanked the Lagos state government for always been proactive. 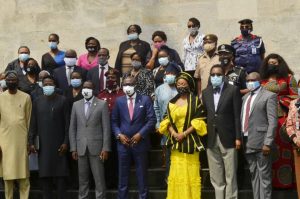