Veteran Yoruba Actor, Saidi Balogun turned 50 of recent and he planned to throw a 4-day celebration starting from today, May 22 up until 25th of May, 2017.
But the actor has now postponed the celebrations till July 4th in honour of his three colleagues who recently died. In his words;
“The postponement is in honour of the the three fallen heroes in the Yoruba movie industry. Olumide Bakare, Prince Adesina Adesanya (Pastor Ajidara) and Moji Olaiya. Both Prince Adesina ADESANYA(Pastor Ajidara) and Olumide Bakare would be buried on the 25 and 26th of May, 2017 respectively. It is in view of this that a July 4-7th, 2017 date has been chosen for the occasion. We hope you will keep the date opened in your diary.”
In a related development, the National Leader of the All Progressives Congress, Asiwaju Bola Tinubu, has reportedly paid for the repatriation of the body of the late Nollywood actress, Moji Olaiya, who died in Canada on May 17, 2017, two months after she had a baby. 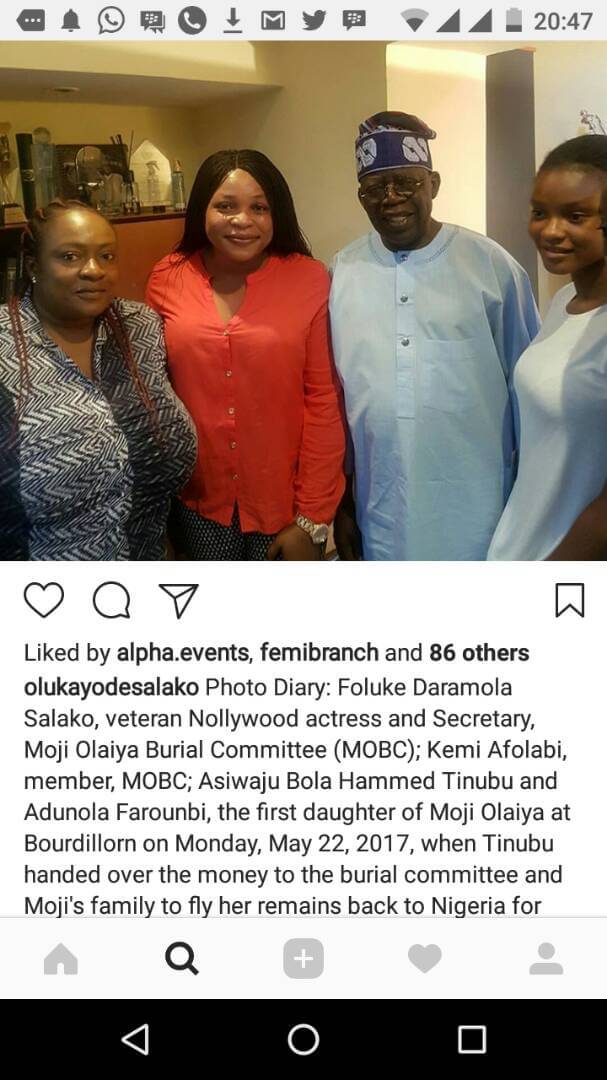 An Instagram post by a film maker and Publicity Secretary, Moji Olaiya Burial Committee and Family, Mr. Yomi Fabiyi, confirmed this.
Fabiyi had written, “The committee, after due deliberation, consulted our father and a National Grand Patron of our association (TAMPAN), Asiwaju Bola Ahmed Tinubu, on the 21st May, 2017 to inform him of the demise of our colleague, Moji Olaiya, and … our decision to have her body back…
“Today, Monday 22nd May, 2017 the committee members, Adunola (eldest daughter of late Moji Olaiya) and two elder brothers of late Moji Olaiya met with Asiwaju Bola Tinubu and he expressed his sympathy directly and gave adequate support that will cover the entire air-freight.
“On behalf of the family, colleagues and friends, we say a big thank you to the national leader for his fatherly and timely intervention.
“Further support or assistance from other sources, if received, will be adequately acknowledged.
“For now, we are grateful to Asiwaju and his family…”