According to her mother who made the sad announcement via her Instagram account, revealed that Miss Nicole Thea and her unborn son, Reign have died on Saturday morning.

“It is with great sadness that I have to inform you that Nicole and her son she and Boga named Reign sadly passed away on Saturday morning,” her mother wrote

Although the cause and how the Pregnant youtube star and her unborn child died was not announced to the public.

Late Nicole became popular after sharing a dance video on Youtube, some weeks away from giving birth as she was already 8 months pregnant before she died untimely.

She had massive followers on Instagram and 76.000 Youtube subscribers for her videos which her partner Boga also played an important role most especially the one of her pregnancy.

Her mother also said that her partner who is also a street dancer, Global Boga will be allowed to release her Pre-videos that she had pre-scheduled. 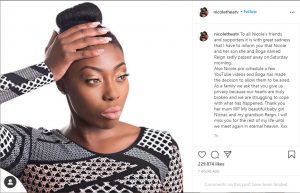 How I made my first million on Instagram — Debbiebarbie