by metronews
in World
0
0
SHARES
7
VIEWS
Share on FacebookShare on Twitter
The bodies of the two men who were spectacularly sprung from police custody in central Maputo on 24 April have been found in a shallow grave, in Moamba district, about 70 kilometres northwest of the capital.
The chilling discovery suggest that, far from being released, the two men, Jose Aly Coutinho and Alfredo Muchanga, were simply taken to their execution.
The Moamba residents who found the bodies on Friday took reporters from the independent television station, STV, to the shallow grave where they had been dumped. Shown a photo of Coutinho, one of the residents positively identified him as one of the bodies.
The residents said they had heard gunshots at around 15.00 on 24 April. This suggests that whoever seized Coutinho and Muchanga from the police at around midday immediately drove them to Moamba and to their deaths.
The bodies were taken to the morgue at Maputo Central Hospital where relatives of Coutinho and Muchanga identified the dead men. Coutinho’s family immediately accused the Criminal Investigation Police (PIC) of carrying out the murders.
The alternative possibility is that fellow criminals grabbed the two men in a highly successful attempt to silence them.
Coutinho in particular may have possessed damning information. He was one of the three men accused of the murder last year of prominent Maputo prosecutor Marcelino Vinanculos.
Vilanculos was murdered outside his home in the city of Matola on 11 April 2016. In August Coutinho and two others were charged with the murder. One of the three, Abdul Tembe, who allegedly drove the car used by the hit squad, escaped from Maputo central prison on 24 October. This led to the arrests of the director of the prison, Castigo Machaieie, and eight other prison staff.
With Monday’s escape of Coutinho, only one of the three original suspects. Amade Antonio, is still in detention.
The motive for the murder of Vilanculos is not known, but he had a reputation for integrity, and was investigating sensitive cases, including some of the kidnappings of businessmen that have plagued Mozambican cities since 2011.
The Attorney-General’s Office (PGR) has linked Coutinho with the country’s most notorious assassin, Momad Assife Abdul Satar (“Nini”), who was released from prison in 2014 after serving half of his sentence of 24 years and six months for his part in ordering the murder of Mozambique’s foremost investigative journalist, Carlos Cardoso. Satar is now a fugitive, wanted for his role in the kidnappings. He is believed to be in Europe, possibly London.
Coutinho seems to have got to know Satar when they were both inmates of the Maputo top security prison. Coutinho was already serving a 16 year sentence for theft and kidnapping. Both he and Satar never had any difficulty communicating with the outside world, using mobile phones smuggled into their cells.
Although he was in prison at the time, the PGR had no doubt that Coutinho was one of those who, in “criminal alliance” with Satar, ordered the murder of Vilanculos. If the PGR is correct, then valuable information on the kidnap gangs was in Coutinho’s head, which may have been an excellent reason for organized crime bosses to get rid of him.
They certainly had assistance from somebody in the police. The circumstances of the “escape” by Countinho and Muchanga from police custody were highly suspicious. They were taken from their cells in the Maputo City Police Command, and driven towards a Maputo police station, where they were to be interrogated in connection with alleged attempts to sabotage the security system in their cells. Before they could reach their destination, the vehicle, belonging to the Criminal Investigation Police (PIC), was ambushed by a group of four armed men, all wearing hoods.
The assailants fired more than 20 shots, mostly at the tyres of the police vehicle, immobilizing it. The two policemen in the car, a Land Cruiser, fled for their lives, allowing the gangsters to seize Coutinho and Muchanga.

It is highly irregular to take dangerous criminals from prison for interrogation in a police station. The normal procedure is for the police interrogators to come to the prison.
Furthermore, although the cells are physically located in the Maputo City Police Command, they are an extension of the Maputo top security prison, which is under the control, not of the police, but of the national prison service, SERNAP. Yet there was no sign of SERNAP involvement in the movement of the two prisoners.
A second police vehicle was escorting the Land Cruiser, but was held up at a set of traffic lights. The chairperson of the Mozambican Bar Association, Flavio Menete, who is a former National Director of Criminal Investigation, found this story absurd. For normally police cars on delicate or potentially dangerous missions do not stop for traffic lights – they just turn on their sirens and drive straight through them. 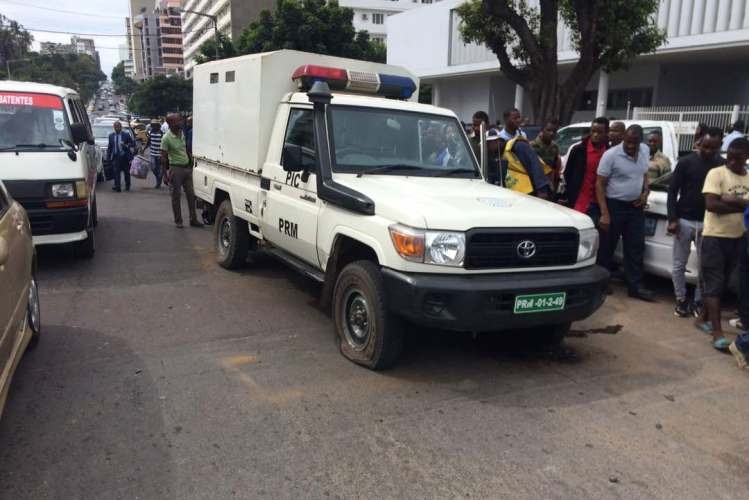